MAKE YOUR MIND UP, EDDIE

Walking freakshow Eddie Izzard has gone so far down the trans rabbit hole that he serves as a parody of the woke society the left is striving for.  When Eddie announced last year that he would like to be referred to as 'she' and 'her', the media met his request with total compliance.  His Wikipedia page was also altered to reflect his new pronouns.
However, earlier this week Izzard appeared at a film launch in East Sussex looking decidedly un-feminine.  There was not a dress, high heels or even his trademark lipstick in sight as he appeared on the red carpet to promote period drama Six Minutes to Midnight.  It appears that Eddie can chop and change at the drop of a hat, only there is one thing he clearly doesn't want to chop and that's what makes him a geezer no matter what. 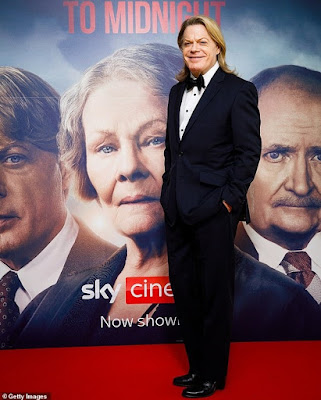 Blokes that dress up as women have been a mainstay of pantomimes for decades.  Here's to hoping that Eddie gets the nod for a safe Labour seat in 2024 and adds to the existing pantomime that is the Parliamentary Labour Party.
at March 31, 2021