Corbyn's footsoldiers are finally getting to grips with the post-Corbyn era.  In a 24-page document launched this week, the introduction states: "One thing is certain: the era of Jeremy Corbyn's Labour Party is behind us, and it's time to move forward".  The document is titled 'Socialist Organising in a New Era 2021-24'.  Their biggest obstacle is laid bare on page 5 with a commitment to the 'working class', a group in society that is currently so alienated from the left that such overtures will probably take decades to overcome - not three years.  This gulf between the workers and the metropolitan middle class left was brutally exposed by Labour activist Paul Embery in his book recently.  The left can't repair the damage they've done and neither can Starmer and his fake flag-waving centrism.  The working class are not buying any of it - and with good reason.
Just take a look at the background images on page 13 (see below).  That's an Antifa flag on the right hand side of the page - the communist movement that drives much of the violence in America post-Floyd.  So while Momentum speak consistently of 'socialism' and 'democracy' throughout the document, the real agenda is staring back from the same pages.  The tearing down of statues, attacks on war memorials and demonisation of British history riles and disgusts the working class and yet here we have Momentum rubbing it in their faces on a page that talks about 'working class struggle'.  Get stuffed. 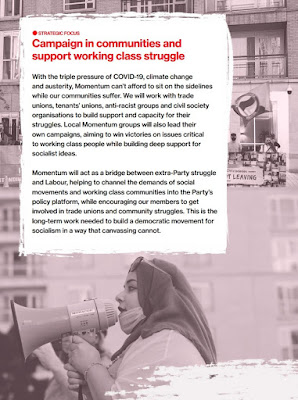 The image of a Muslim lady with a megaphone hammers home the detachment, something that is compounded later on in the document by references to BLM and images of people raising their fists in a black power salute.  The constant use of race as a weapon will only deepen divisions in society and further alienate a working class who are not as stupid and gullible as the types that run Momentum seem to think.
The release of the document was accompanied on social media by a video in which various speakers talk of the need to build a movement that can basically take over the Labour Party from the ground up.  One of the main speakers is a well-spoken well-manicured Asian lady who addresses the camera from a plush-looking living room.  She sums up this middle class organisation.
Click below for the video.
As for taking control of Labour, the left have a good starting block, but that block is far from secure.  Thanks to their previous efforts in 2019, they managed to fill the opposition benches with more hard left MPs than ever before.  However, many of those MPs were selected by underhand entryist tactics and they can be removed in 2024 by underhand core tactics.
In the meantime, while handsomely paid MPs are unlikely to jump ship, many activists and councillers have already done so.  They were spoilt by four years of Corbyn and they simply cannot stomach his successor.  If Corbyn departs permanently this could cause a further exodus and potentially lead to a new party.
While our society appears to be heading towards a dystopian hard left future, it's highly unlikely that Momentum will play a significant part in it.
at March 12, 2021