The sharp decline of coronavirus reached another milestone over the weekend.  Deaths (within 28 days of a positive test) dropped into double figures for the first time since 9 October.  The figure was part of the traditional weekend lull that occurs in updates provided on Sundays and Mondays, although Saturday's update was also the lowest since October, with 158 deaths (within 28 days of a positive test).
New cases have now dropped to their lowest since September, despite an increase in testing that looks set to top one million tests per day now that children have returned to school in England.  Hospital admissions are currently the lowest since 7 October.
There is clearly no justification for restrictions to continue for months on end.  We were told that lockdowns were to protect the NHS.  The NHS is not vulnerable (and never was, as proven by the mothballing of half a billion pounds worth of Nightingales).  SAGE agents have changed the goalposts, but as the virus fades away into almost nothing they will not be able to justify the lockdown.  People should be getting angry - and quite rightly too. 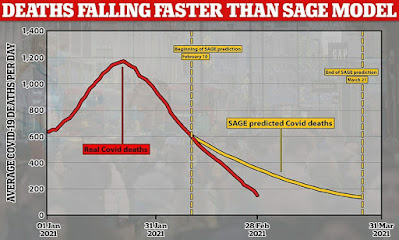