As Boris Johnson rowed back on his promise not to introduce domestic vaccine passports, Tory rag the Daily Telegraph got behind his dystopian plan by declaring that voters 'are siding' with him.  The Telegraph article pointed to a recent Redfield and Wilton poll that showed only 17 per cent of those asked were against the idea, while 56 per cent were in favour.
Unfortunately for the Telegraph, just a few paragraphs down the page was an interactive poll of their own that was clearly not going to plan.  Unlike the Redfield poll, which was based on just 1,500 respondents, the Telegraph's poll had clocked up more than 6,000 votes.  49 per cent were against domestic vaccine passports, while 46 per cent were in favour (see screenshot below). 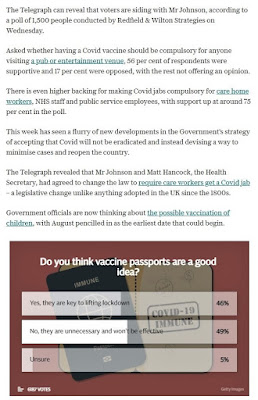 When the embarrassing contradiction was noticed, some bright spark decided to delete the poll and replace it with a binary choice that would supposedly skew the result in their favour.  However, the new choice of question actually had the opposite effect and 4,000 votes later a whopping 65 per cent were now opposed to domestic passports!  That's a long way from the 17 per cent quoted in the article. 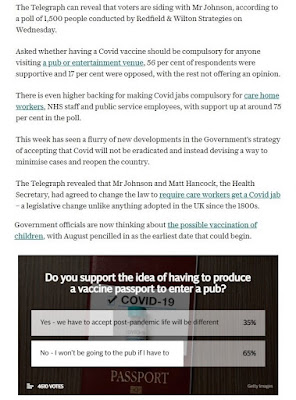 If our PM goes ahead with this totalitarian proposition, he will face potentially the biggest backlash of his premiership to date.  People are sick of restrictions on their daily lives and crave freedom.  A domestic passport does not offer freedom, it just presents another unwarranted restriction and intrusion that will crush our liberty at the point at which the virus is in retreat.  People have bent over and been shafted enough already and one by one they will come to realise that their government is taking liberties for the sake of taking liberties.
The Coronavirus Act has just been extended until September, with very little opposition from the so-called opposition.  Make no mistake, the PM and his SAGE puppet masters have no intention of ending 'all restrictions' in June.  The sooner we all realise that and prepare to fight to reclaim our freedom the better.
at March 30, 2021