Klaus Schwab and his World Economic Forum made no secret of their admiration for lockdowns in one of their latest video posts.  However, even by their dystopian standards, this one appeared to overstep the mark.  The video was posted to social media with the tagline: "Lockdowns are quietly improving cities around the world".  It was deleted five days later, although the article linked to the video remains on the WEF website. 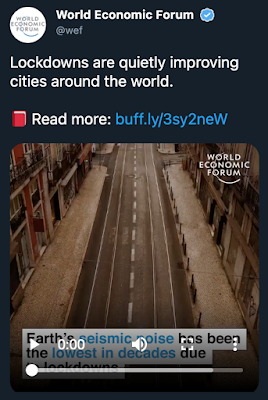 The video and its accompanying article heap praise on the positive environmental impact of shutting down our economies and locking people away.  The resulting lowering of 'seismic noise' apparently allowed scientists to detect earthquakes that they wouldn't normally have done.  The coronavirus lockdowns were an "unprecedented opportunity" said Dr. Frédérick Massin.  It's a lame excuse for future lockdowns, but it's clear that further lockdowns are on the WEF agenda.
The concept of 'climate lockdowns' has been floating around for months and will increasingly enter the mainstream media narrative as the agenda moves on from pandemic to climate 'emergency'.  Both The Telegraph and The Guardian have recently covered the story.
The deleted WEF video states that the drop in carbon emissions won't slow climate change 'unless we lock in emissions cuts'.  And by that they mean lock in people - again.
The video can be seen below.
In true WEF fashion, they made no secret of the fact they'd released this video and its controversial tagline.  Instead of merely banishing the original post, they tweeted a screenshot of it it alongside a half-hearted apology for the tagline.  However, the 'apology' went on to defend coronavirus lockdowns, saying they are an 'important part of the public health response to Covid-19'.
The replies to their 'apology' were not overwhelmingly positive... 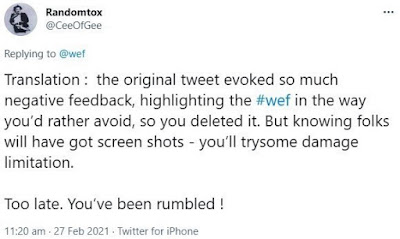 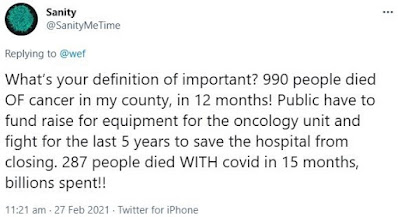 Opposition to the World Economic Forum and its 'Great Reset' will constitute a major component of BTLP output going forward.  A snazzy logo for this campaign was unveiled in a meme yesterday.  We must never allow the West to fall to communists, whether that threat comes from political parties such as Labour or the megalomaniacs of big tech, NGOs and their Western puppet leaders.
at March 11, 2021