The leader of Enfield Council claims to have reported Conservative opposition councillors to the police for a 'hate crime'.  Nesil Caliskan broke the news on Twitter after she accused them of repeatedly referring to the council as a 'regime'.  The word 'regime' is an insult with 'Islamophobic overtones' she said.
Cllr Caliskan's tantrum came in response to a video from Cllr Chris Day, a Tory member who was complaining about traffic calming measures in the borough.  However, at no point during the video does Cllr Day use the word 'regime', although he does refer to the Labour council as a 'dictatorship' in his accompanying tweet. 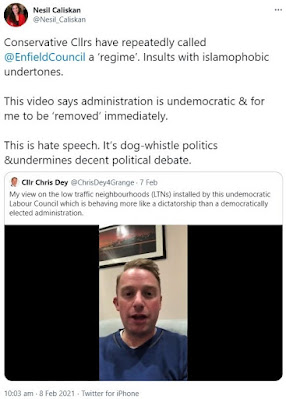 Cllr Caliskan confirmed she had contacted police after a Lib Dem spokesman commented on her Twitter rant.  His interjection actually riled her up further, as she accused him of 'telling her how she should feel' in response to what she called 'racist discourse'.  So now the use of the word 'regime' is racially aggravated too?  Stunning.  How on earth did this fragile human being rise to the position of council leader? 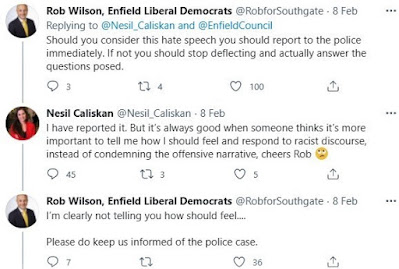 Ironically, in 2019 Caliskan was found to have breached her own council's code of conduct by bullying a Labour colleague.  Therefore, we could say her latest escapade is a case of pot, kettle, black - but that would probably be a hate crime too!
at February 10, 2021