Ex-TV presenter Anthea Turner has fallen foul of the Twitter mob and the mainstream media after she tweeted a meme that was deemed both anti-mask and offensive to fat people.  In a barely literate follow-up, Turner also lambasted the closing of gymnasiums while fast foot chains like McDonalds remained open.  Fair point. 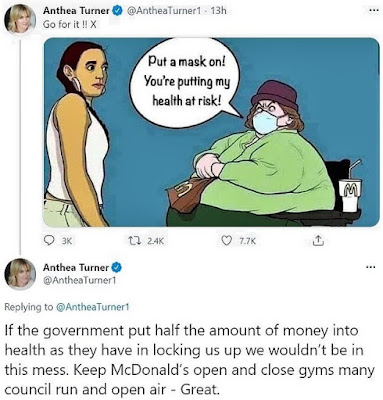 A cursory glance at Turner's Twitter feed shows that she has been railing against lockdown for a while, but the McDonalds-guzzling fatty meme was the green light for the media to attack.  Despite not having much of a career to cancel, Turner responded in typically cowardly fashion by deleting the tweets and issuing a cringeworthy apology.

Fellow lockdown sceptics criticised her for backing down, but why did she feel the need to anyway?  Her original tweet garnered more than twice as many likes as it did comments.  The implication of the meme is that the large lady is obese from her own gluttony and this has in turn led to her disability.  The supposed 'anti-mask' element is debatable if it is there at all.
One of those supporting Turner's message pointed out that Mark Drakeford's lockdown diktats in Wales mean that driving to a fast food restaurant is 'legal', but driving to a place for exercise is not. 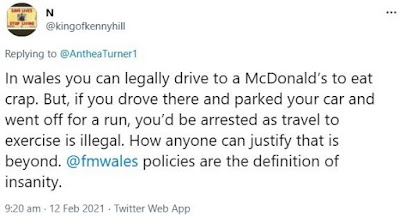 The rules in Wales are truly absurd.  You can walk or cycle as far as you like, but only if you begin and start that exercise from home.  If you drive to a beauty spot, no matter how local - you could be fined.
Among those tweeting their disapproval of Turner were self-righteous hypocrite Piers Morgan, fat lefty 'comedian' Kathy Burke and Labour's Jess Phillips (remember her?).  Jess somehow made it about herself, naturally.

Best stick to obscurity Jess, you've humiliated yourself enough in the last year with your daft notions of leadership!
at February 13, 2021