Labour activist Paul Embery has lambasted his hard left colleague Ash Sarkar over her response to the death of Captain Tom.  Paying little heed to the mood of the nation, but playing to her Brit-hating audience, Sarkar chose not to pay tribute and instead used his death to lash out at lockdown sceptics.  She also echoed the views of many leftists on Twitter by making the point that Sir Tom's death was no more worthy of merit than any of the other 100,000 victims (within 28 days of a positive test).

Embery, who has clashed with Sarkar before, is worlds away from her woke metropolitan far left position.  A working class patriot, Embery espouses the values of Blue Labour.  His recent book Despised dealt with the modern left's detachment from and disgust for the working classes and their values.  No wonder he and grammar-school educated Ash don't get on.
Embery is also a lockdown sceptic, which is no great surprise given Blue Labour's embrace of so many conservative values.  Responding to Sarkar he pointed out that lockdown scepticism does not necessarily mean a lack of compassion for our elderly. 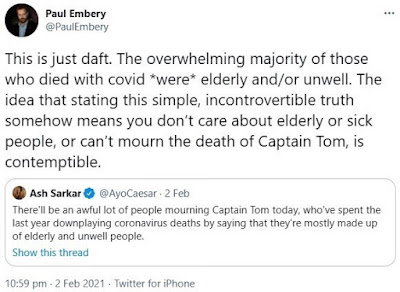 If a deadly virus comes along that primarily kills the sick and elderly, wouldn't it just make more sense to isolate the sick and elderly, rather than lock down our whole society and consign thousands of young people to perish as well?  Surely the approach supported by lockdown enthusiasts is twice as cruel and if anything lockdown sceptics are actually capable of displaying more empathy?
Meanwhile, Sarkar could barely contain her spite by issuing another tweet just after 6pm in which she mocked the 'clap for Tom', something that had been endorsed by both main party leaders.

The irony is that many lockdown enthusiasts would probably endorse martial law if the BBC said it was a good idea.
at February 03, 2021