Parler has returned five weeks after it was driven offline by a co-ordinated big tech assault.  Our account was restored, albeit without all previous 'parleys' - casualties of Amazon's decision to pull the servers.  Our small following remains fully intact (a following that had almost doubled in the 48 hours prior to Parler's disappearance). 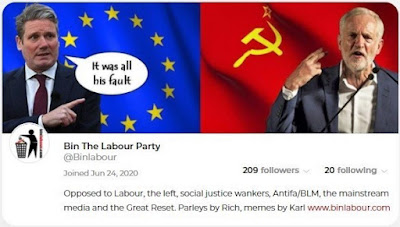 Some functionality is missing via web browser, so we are currently unable to share visual content ie. memes and videos.  We are experiencing no such issues on Gab.
For the record, we find the removal of Parler co-founder John Matze as CEO very distasteful.  The timing of his departure came after he, as the public face of Parler, had endured weeks of media smears and we should not forget that it was he alone that provided the public defence of Parler as the big tech attack unfolded.
Regardless, our quibbles with Parler are insignificant compared with Twitter - a platform that we appear to be indefinitely barred from using.  Our second appeal against the ban is now five months old and it's clear that it will never see the light of day.  We do have the option of cancelling the appeal and de facto admitting our guilt, something that we are considering in the near future, but only as a means to promote Gab and Parler on their platform.
It's vital that conservatives, libertarians and patriots expand their horizons beyond the big tech monopoly.  If they can come for Trump, they'll have no qualms coming for us or you!
We can be found on Parler here.
at February 19, 2021