It's fair to say Nicola Sturgeon is having a rough time of it at the moment and it's about time.  The mainstream media have largely given her a free ride over the course of the pandemic, with scandal after scandal being brushed aside.  Her persistent absence from COBRA meetings, scientific advisor's second home trips and MP Margaret Ferrier's 800 round trip with Covid are just a few of the incidents that are rarely discussed now, yet it seems we'll be hearing rumblings about Dominic Cummings and Barnard Castle forever.
However, the Alex Salmond saga is not going away and there are plenty of signs her authority is beginning to slip.  The removal of Joanna Cherry from the SNP's frontbench at Westminster led to furious infighting and divisions in the so-called 'nationalist' party were laid bare.  Her authority has been directly challenged again by Police Scotland over her threat to effectively close the border with England, under the guise of Covid policy differences.  The deputy chief constable declared over the weekend: "We are a United Kingdom and to try to intervene with that would not be particularly effective".  That was a brutal slap down and the second time the police have refused to support her border threats.
Sturgeon is also likely to provoke a backlash when she announces her plans to ease the lockdown in Scotland.  She could easily score huge points over Westminster if she ended it more quickly, but this is a socialist we're talking about and if there's anything we know about socialists - they love control.  As with last summer, the lockdowns in Scotland (and Wales) are likely to be even more drawn out than in England.
While the SNP is still almost certain to win again in May's Holyrood elections, its lead has slipped from an all-time high of 39 points back in October, to 31 points.  Similarly, support for Scottish independence has dropped from a record 14 point lead in December to just five points.  Crucially, in the most recent poll 10 per cent were undecided.  It seems that Sturgeon's assured victory in IndyRef2 is no longer set in stone - not that it's going to happen any time soon anyway.
On that note, a huge petition has been building on the UK government's website in opposition to IndyRef2. 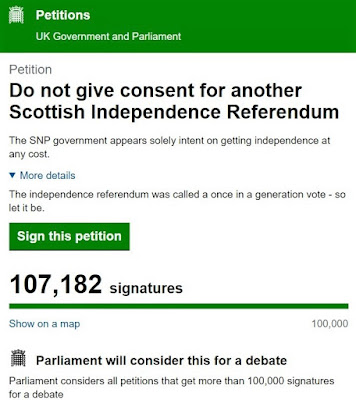 Nicola and her phoney nationalists would love to portray this petition as the work of the imperialist English, jam-packed with signatories from Northumberland to Devon.  However, just a cursory glance at the heat map for the petition shows that the overwhelming majority of signatures are from Scotland itself. 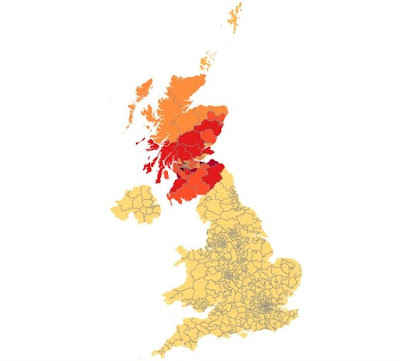