OUT WITH THE OLD, IN WITH THE WOKE

The painfully woke headteacher of Howden Junior School in the small Yorkshire town of the same name is symptomatic of the dominance of left-wing culture in our schools.  His decision to ditch traditional house names at his school and replace them with those of modern day lefty activists such as Greta Thunberg has courted controversy, but should come as no great surprise.  This is the direction of travel our schools are going.
Announcing his decision in a lengthy Twitter thread, Lee Hill confirmed that he was ditching historical British figures such as Sir Francis Drake, Sir Walter Raleigh and Admiral Nelson.  His reason?  Last year he received a solitary email from a former pupil who 'educated' him about their links to racism and slavery.  The email was inspired by the BLM protests that were raging at that time, and had led to the toppling of statues and vandalism of monuments across the United States and Europe.
Hill praised the 'bravery' of the ex-female pupil and confirmed that the school houses would now be renamed after three foreigners and a British footballer - Amanda Gorman (a poet who spoke at Joe Biden's inauguration), Marcus Rashford (of free school meals fame), Greta Thunberg (Swedish eco-brat) and
Malala Yousafzai (Pakistani refugee and activist).
One wonders if those names will be remembered in 300 years time, but if the left-wing domination of our society continues then it stands a very good chance.
Lee Hill has currently retreated to a safe space by locking down his Twitter account in response to an online backlash.  Before he did so, the Daily Mail uncovered a series of tweets attacking the Education Secretary Gavin Williamson, including a meme he boasted about sending to colleagues calling for Williamson's head (literally).  It appears that this passes for humour among Hill's anti-Tory colleagues. 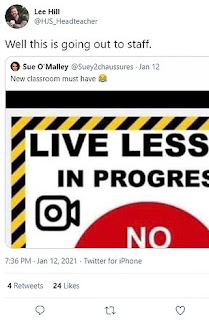 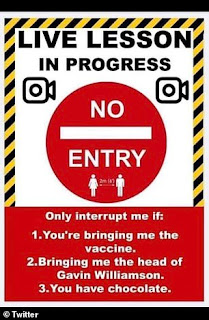 Hill also criticised his neighbours in another tweet, saying he would not clap for carers as his neighbours had clearly not been obedient enough for his liking.

A poll conducted by the Hull Daily Mail suggested that support for Hill's actions was not exactly universally popular...

The eradication of British and European history from our landscape is a Marxist agenda, driven by a desire to remove all symbols of national pride.  A people who have no concept of pride in their own culture or history will much more easily conform to a Marxist way of thinking.  Statues will continue to fall across our lands, names will disappear and flags will burn until hatred consumes society to a point in which the transformation is almost irreversible.
We are already on that slippery slope as it is.
at February 24, 2021