Brexit legend Darren Grimes has come under sustained abuse on Twitter after he tweeted his intention to move back to the north-east after struggling with depression during lockdown.  He attracted little sympathy from the cesspit, the left unleashing a barrage of hate and mockery.  He even trended on the site, such was the level of vitriol.

It takes guts to speak publicly about mental illness, even in today's supposedly touchy-feely world.  Grimes ticks a lot of boxes that make him a marked man in the Twittersphere.  He's a Brexiteer, a conservative - a gay conservative in fact, so extra hate from the left for that - a northerner (more hate from the left) and a lockdown sceptic.  Grimes would have anticipated a spiteful response to his announcement, so to do it via Twitter shows he has a backbone.
Not all the feedback was negative.  Twitter has not yet turned into a sealed echo chamber for the left, despite the great exodus of the last twelve months.  Conservative and libertarian voices rallied to Grimes's defence. 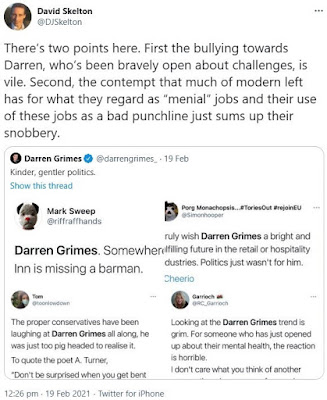 Times have changed, and not for the better.  We all need to put aside petty differences and stick together.
at February 20, 2021