The daft notion that the all-powerful Nicola Sturgeon and her independence cause is somehow backed by a majority of Scots is a myth that has gained ground in recent years, particularly in England.  Sturgeon is repeatedly returned to power because of one crucial fact - there is no opposition.  The rise of the SNP can be laid firmly at the door of Tony Blair, devolution and decades of his party taking Scots for granted (as they did the north of England, also to their cost).  Since their fall from power, the leadership of Scottish Labour has changed almost as many times as the management of your average football team.  Each change of leadership has ended in worse election results to the extent that the Conservatives are now the official opposition, albeit with no chance of ever forming a government.  The SNP it appears, are here to stay, but that is not to say that their aims are shared by a majority of Scots.
In the 2019 general election the SNP garnered 45 per cent of the vote in Scotland.  Now that's huge, but it also means that 55 per cent did not vote for them.  Those percentages may sound familiar, because in 2014 that is exactly how the independence referendum turned out.  When given the chance to explicitly back Nicola's dream of independence - Scots rejected it by a ten per cent margin, two and a half times more than the majority for Brexit, incidentally another referendum result rejected by Sturgeon.
A petition on the UK government website aimed at preventing Sturgeon's IndyRef2 is closing on the 100,000 name threshold required for a Parliamentary debate, but despite being a UK-wide petition the heat map tells us that the overwhelming majority of signatories are from Scotland itself.  In fact, they are not just from Scotland, they are mostly from constituencies represented by none other than the SNP.  It's grim viewing for devotees of Sturgeon. 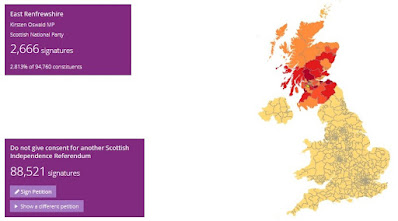 Scottish comedian Leo Kearse is a Unionist who returned to his native Glasgow recently after having lived in England for years.  His home town is now an SNP stronghold, but that didn't stop him from producing a damning exposé on both the SNP and Scottish nationalism in general: "The only thing getting stronger in Scotland is heroin and drugs deaths".
More grim viewing for the SNP, click below for the video or watch on YouTube here.
You can follow Leo Kearse and his brand of right-wing observational comedy by clicking the subscription button in this link.
at February 09, 2021