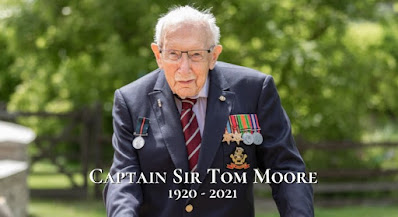 While the overwhelming majority of Brits mourned the loss of a national hero on Tuesday, guess which left-wing cesspit was used by vile scum to mock his death?
Twitter, naturally.
The hate for Captain Tom actually began a couple of months ago when he tweeted from Barbados, where he was fulfilling his dream holiday of a lifetime.  Imagine being so spiteful that you begrudge a 100-year-old a holiday in the same year he raised more than £30 million for the NHS?  Furthermore, many of these fanatical lockdown enthusiasts got it completely wrong by suggesting that he had somehow broke the rules.  He left the country on December 11 when his hometown was in Tier 2 and foreign travel was allowed.  He did not break a single rule.
Take this idiot who seems to have retroactively decided that England was in full lockdown mode in December. 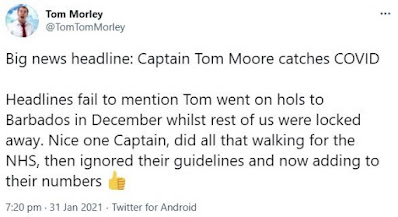 The theme that Captain Tom somehow got his 'just desserts' by catching the virus on holiday ran through many of the sick comments.  However, he tested positive for coronavirus more than two weeks after he returned to the UK, so they've got it wrong again.  His positive test came after he was discharged from hospital last month, where he had been diagnosed with pneumonia.  It appears that like so many Covid victims, he caught the virus in hospital. 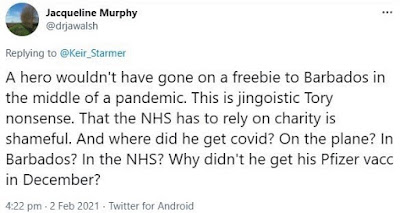 He didn't get his jab in December because he was out of the country, but there is no guarantee that he would have been offered it then anyway.  Most people over the age of 80 were not vaccinated until January. 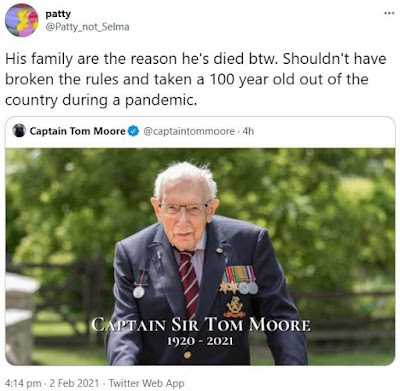 It's worth noting that these spiteful individuals are a tiny majority, even on Twitter.  Many of the more offensive messages were quickly deleted after coming under criticism.
The absolute legend that was Captain Tom Moore will live long in the collective memory of our nation.  That's more than can be said for the leftist lockdown fanatics of Twatter.  He achieved more in six months than many of them will achieve in their entire sad little lives.  Losers.
at February 02, 2021