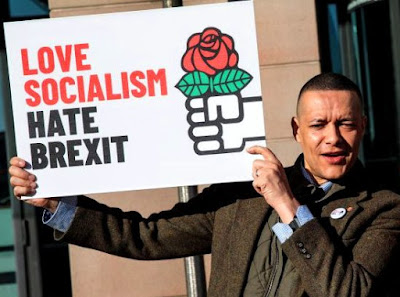 Hard left Labour MP Clive Lewis has promoted a Cummings conspiracy theory on his Twitter account.  In a bizarre change of direction from the crescendo of outrage, Lewis quotes a blogger who suggests that the PM's advisor may have been in Barnard Castle to strike a deal with GlaxoSmithKline.  Craig Murray points out that two days after Cummings was spotted in the town the company announced a deal with French firm Sanofi to develop a Covid vaccine.  Murray doesn't provide any evidence to back up his claim. 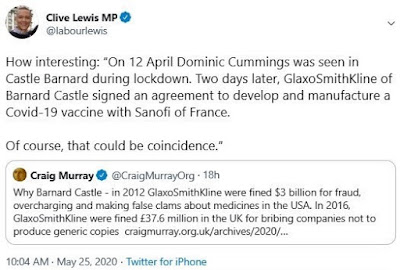 There are several problems with Murray's theory.  Firstly, while GSK do have a factory in Barnard Castle, it is one of 18 sites across the UK and its headquarters is actually based in Brentford - just 12 miles from the Cummings family home in north London.  Why would he drive all the way to their factory in County Durham?  Secondly, the two eyewitnesses who saw Cummings in Barnard Castle describe him walking along the River Tees with his wife and child.  The River Tees flows south of Barnard Castle, while the GSK factory is north of Barnard Castle.  Why would he take his family to discuss important government business anyway?  Finally, even if Cummings was involved in negotiating a deal to develop a vaccine, why on earth would that be such a closely guarded secret and why would he then parade himself around in public afterwards?

Following much mockery of his initial tweet, Lewis goes on to quite Isaac Asimov in a further allusion to his Matrix-style train of thought.