The London youth wing of Labour deleted its vile Bobby Sands tweet last night.  It had remained online for two days, but the cowards finally bowed to pressure.  Unionists in Northern Ireland had expressed outrage over the tweet and the DUP's Ian Paisley Jnr had appealed directly to Keir Starmer for action.  Shadow Northern Ireland Secretary Louise Haigh told the Belfast Telegraph that the tweet was "provocative and inappropriate" and welcomed its removal. 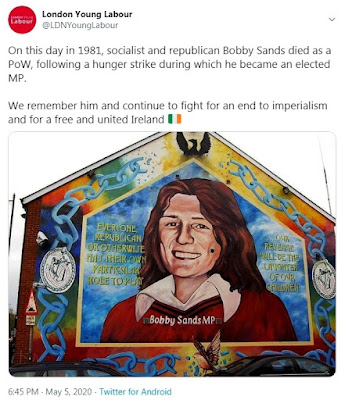 The low lives can delete their tweet, but the internet never forgets and neither will Londoners who witnessed the bombs of the IRA.
at May 08, 2020