The second edition of PMQs between Starmer and Johnson resulted in the bizarre situation where the exchanges continued beyond the chamber - in writing.  During his initial questioning Starmer had raised the issue of government advice for care homes early on in the pandemic.  Sir Squeaky had quoted from advice issued in February, but wasn't satisfied with the response from the PM.  He later wrote to Boris demanding that he return to the chamber and 'correct the record'.  Boris was having none of it and wrote back saying that Starmer had quoted the advice out of context.

The two letters can be viewed below (click to enlarge). 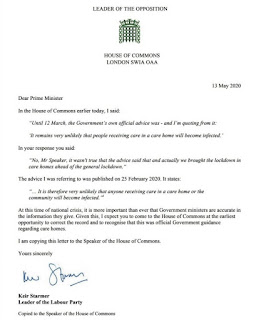 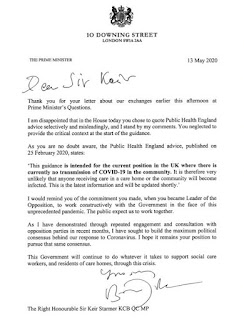 The fact that our embattled Prime Minister - at a time of national crisis - is facing such petulant demands from his opposite number is shameful.  As Boris quite rightly states in his response: "The public expect us to work together".

Given the increasingly aggressive stance from Starmer and his MPs, there appears to be little chance of that happening.
at May 13, 2020