In a story completely overlooked by the mainstream media, the MP for Bradford West was involved in a humiliating gaffe last Friday.  In her VE Day tribute Naz Shah wanted so desperately to include the Asian contribution to the Allied war effort that she included a picture of soldiers from the Indian Legion.  Unfortunately for Naz, the Indian Legion was a military unit that fought for Germany!

Indische Legion (German) was formed from an allegiance between the Nazis and pro-independence Indians who intended to fight British rule.  The legion saw action in Europe and in 1944 was transferred from the jurisdiction of the German Army to the Waffen-SS. 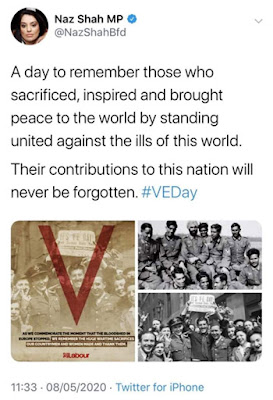 As you can see from the enlarged photo below, the uniforms are clearly not British. 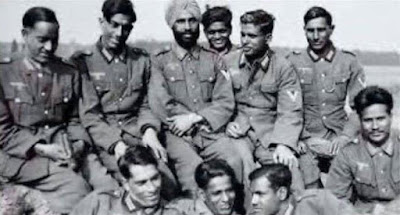 Shah deleted the tweet once her gaffe had been pointed out by several Twitter users.  She later tweeted the same message again, but replaced the SS photo with one showing the Queen Mother inspecting British Indian troops.  Shah's re-composed tweet can be seen below or here. 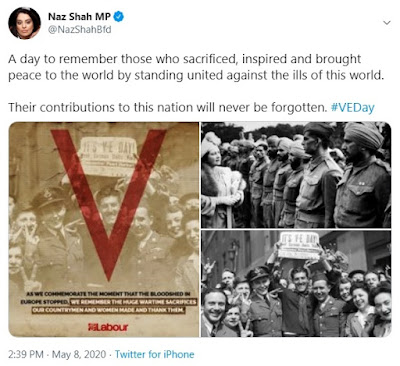 Thanks to Steve Ward for bringing this story to our attention.
at May 13, 2020