Last year Yvette Cooper was the toast of the Remain lobby, having consistently voted to block Brexit and putting her name to one of the bills that successfully stopped Britain leaving the EU.  All this came despite her West Yorkshire constituency returning one of the biggest Leave votes in the country.  The two-faced snake had also written into her 2017 election leaflet a pledge that she would "not vote to block Brexit".  Her betrayal was condemned by some in her own party, with one Wakefield councillor blaming her directly for Labour losses in the 2019 local elections.  In December's general election she clung onto her seat despite her majority being slashed by a whopping 13,000 votes.  She was left representing a marginal seat for the first time, although she is likely to bounce back next time as most of her votes had been lost to the Brexit Party, not the Conservatives.

Leave voters spent 2019 fuming at her, but Remainers idolised her.  That is, until now.

Cooper's place in remoaners' hearts was ejected on Monday following a brief Commons address in which she told the House she intended to abstain on the government's initial reading of the new immigration bill.  As chair of the Home Affairs Select Committee she said she would be tabling amendments and if they were not met she would oppose the bill at the next stage.  Just by failing to vote against the bill initially was enough to drive leftists and Remainers up the wall in their tender Twitter bubble.  Watch below and then look at some of the responses. 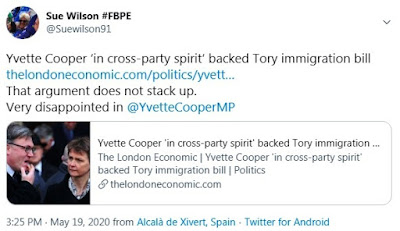 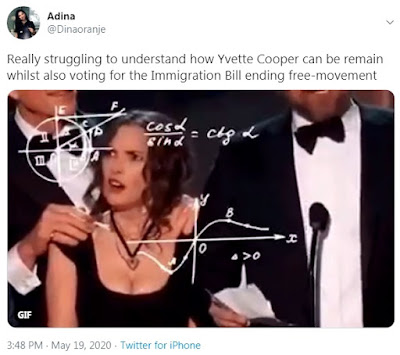 How ironic that Cooper has so quickly become a hate figure for the Remainiacs?  Some of these people were so angry that they failed to realise the difference between 'abstaining' and voting in favour of something.

As for Yvette Cooper - we will never forget her response to the 2015 migrant invasion of Europe during which she was one of thousands of politicians across the Western nations openly encouraging the influx.  Only a leftist moron could claim that this woman was 'anti-migrant'... 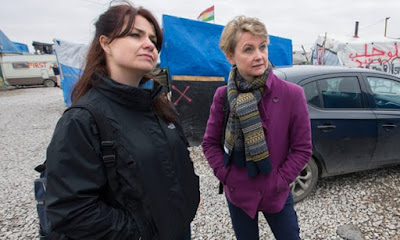 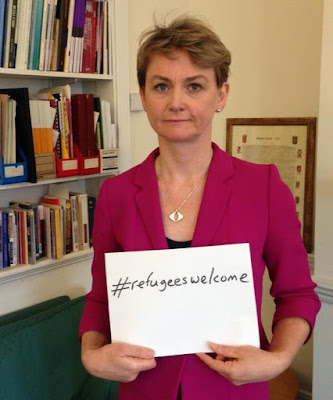