The only Labour MP in Scotland has continued his one-man crusade to expose a potential Covid-19 cover-up by the SNP government.  Ian Murray (Edinburgh South) has again written to the First Minister after she responded to his earlier claims in yesterday's Scottish press briefing.

Murray, who also Shadow Scottish Secretary, claims that a major outbreak of coronavirus stemming from a Nike conference in Edinburgh was hidden from the public.  The conference took place in February and was attended by delegates from around the world, one of whom is thought to have brought the virus to the city.  Scottish government officials are later said to have discovered that the individual tested positive when they returned to their home country, but did not inform the public.  At least 25 people linked to the conference later confirmed positive for Covid-19.

Nicola Sturgeon yesterday accepted that an 'incident management team' was set up to investigate the outbreak, but that the public were not informed as such information could potentially threaten the 'patient confidentiality' of those involved.  Murray was having none of it and quoted two pieces of legislation that he says would supercede concerns over patient confidentiality in this case.  You can read his letter in full below, click to enlarge. 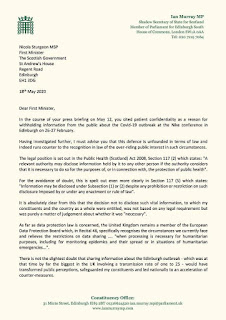 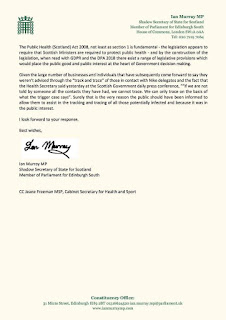 Scotland will be vital to Keir Starmer if he is to stand any chance of winning the next general election.  The last time Labour won a general election, back in 2005, the party held 41 Scottish seats.  Ten years later Labour was almost wiped off the map in Scotland, holding onto just one seat - Murray's.  Labour recovered slightly in 2017, gaining six seats, but lost all six in December to the SNP.

The SNP's dominance since 2015 has overwhelmingly come at the expense of Labour, so perhaps it will not come as much of a surprise if Labour adopt a more aggressive stance towards the SNP in the years to come.  It's no coincidence that Murray is hosting a Zoom discussion tonight on how Labour can win again in Scotland.
at May 19, 2020