Alastair Campbell was deployed on every mainstream media channel last weekend in a series of interviews attacking Dominic Cummings and Boris Johnson.  Campbell had gone on the offensive as soon as the story broke and has been tweeting about it incessantly.  After attacking their 'arrogance' and 'hypocrisy' he was himself caught out displaying arrogance and hypocrisy in abundance on Wednesday.  His ego simply wouldn't allow him to think that the following selfie might lead to such accusations, but as you can see there is not a lot of social distancing going on here... 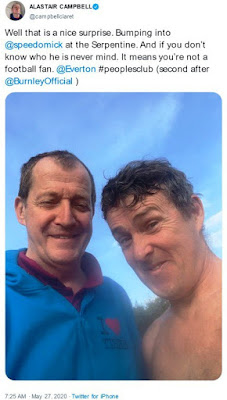 Campbell subsequently deleted the tweet and apologised.  One might have expected him to tone it down a bit after that, but no such luck.  Later in the day he declared "arrest the fuckers" as he watched Wednesday's daily briefing.  The vitriol continued to flow and then came an astonishing display on Thursday morning in which he appears to have a go at 'comedy'.  In the following video Campbell does a woeful impression of Boris Johnson before launching into his own satirical version of the national anthem.  We guarantee most of you won't be able to watch to the end, it's painful to watch.

Unfortunately for Campbell, his use of a regimental tie and medals didn't go down too well in some quarters.  Campbell was never in the military, albeit he and his PM were never shy in sending others to war.  Tory MP Johnny Mercer was one high profile veteran who objected to the video, accusing Campbell of "taking the piss out of servicemen" and a "descent into farce".  Campbell fired back at Mercer in two tweets, labelling him a 'cowboy' and making several references to Cummings.

Later on Thursday the military charity Help for Heroes publicly requested that Campbell remove his daft video, leading to his second apology in two days saying: "It was directed entirely at Mr Johnson and his government colleagues, and I am sorry if that was not clear".  He also deleted the video, but said he wouldn't be apologising to Mercer.

If Cummings isn't driven out soon, what on earth will Campbell do next?
at May 29, 2020