IT'S ALL ABOUT BREXIT

Brexit is under attack (again), but many people are blissfully unaware of the plot that has been unfolding this week.  While many ordinary people will have been somewhat justifiably aggrieved by the lockdown travels of Dominic Cummings, their anger is being deliberately stoked by a coalition of establishment news media, opposition parties and Remain groups.  From the protests outside Cummings' home to the 24/7 rolling coverage of anti-Cummings news coverage - it all suits a Remain agenda that aims to derail Brexit once again.

Only last month I wrote here on this very blog how Cummings is despised by Remainers as much as (if not more than) they hate Boris himself.  It's no coincidence that both men were instrumental in the Vote Leave campaign and are also primarily responsible for delivering Brexit Day in January.  That wasn't easy and it took a very risky general election in order to get there, but despite a crushing defeat for the Remainers they are not finished yet.  The transition period presents the next stage in their campaign to tie this country to the European Union forever.

Remainers are desperate to get rid of Cummings in order to weaken Boris's resolve and get the transition period extended - for up to two years, initially.  Dom's lockdown travels presented the ideal situation in which to exploit public anger and oust him.  Many of the backbench Tory MPs who have called on the PM to sack Cummings backed Remain in 2016, including the junior minister who resigned earlier this week.  Then there is the question of the two letters that appeared within 24 hours of each other this week.

On Tuesday six MPs wrote to the PM demanding that he sack Cummings on the basis of "maintaining trust and confidence in public health advice".  The very next day a letter arrived from Michel Barnier addressed to the very same six politicians - all Remainers.  The letter confirmed that the EU was open to a Brexit extension of up to two years.  Both letters can be seen below (click to enlarge). 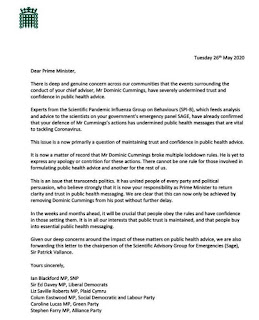 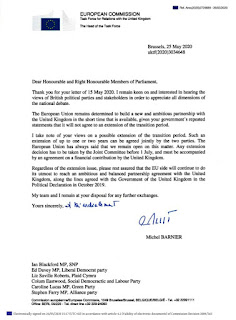 Of course there is no reference to Brexit in their letter to Boris Johnson, but joining the dots is becoming easier by the day.  As the mainstream media intensity began to wane yesterday afternoon, Remainers upped the ante on social media.  Ian Blackford repeated his demands for Cummings' dismissal in several tweets and urged his followers to write to their MPs.  He wasn't alone.

MPs are already being bombarded by emails and letters regarding Cummings, but now there is a template being circulated online urging the public to write to their MP - specifically if they have a Tory MP.  Remainers know they cannot budge Cummings without Tory help and as we know, there are still Tory MPs willing to oblige.  One version of the letter template being circulated can be seen below.  Sophie Wilson is a Labour activist who stood in Rother Valley at the last general election. 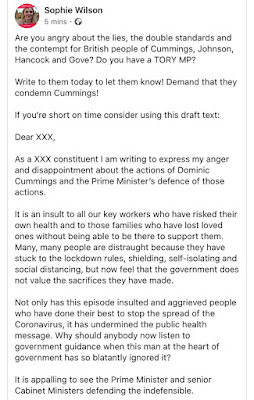 Unlike Blackford and co, some Remain activists are not keeping the real agenda to themselves.  The following tweet was in response to a Twitter user who correctly surmised that the removal of Cummings was indeed aimed at securing a Brexit extension. 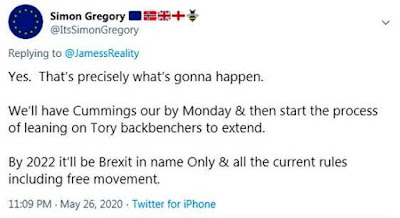 Durham Constabulary have now released a statement saying the force would be taking no further action against Mr Cummings in relation to his lockdown travels.  One of the journalists responsible for breaking the Cummings story subsequently announced that the statement confirms he 'did' break lockdown rules.  However, the statement clearly says that "there might have been a minor breach of the regulations".  That's not merely twisting words, that's an outright lie from the Mirror's Pippa Crerar.  Needless to say, her newspaper backed Remain in 2016.

The degree of hypocrisy at work in the mainstream media this week hasn't gone unnoticed.  How is it that Cummings - an unelected advisor - has attracted rolling news coverage when Members of Parliament and even ministers have flouted lockdown, yet they have been overwhelmingly ignored by the media?  The opposition would argue that it is not the same for the likes of Stephen Kinnock and Tahir Ali because it is not their own rules they are breaking, but that argument falls flat when you consider the cases of Vaughan Gething and Robert Jenrick.  Gething was defended to the hilt by the First Minister of Wales for his indiscretion and Gething is a minister for health no less.  In Jenrick's case we had a Conservative Secretary of State who travelled 150 miles to his second home and from there went on to visit his parents' home.  Where was the media outcry?  Oh, that's right - as with all the other cases, Jenrick backed Remain in 2016.

Whether or not journalists ensure the Cummings story rumbles on remains to be seen, but make no mistake - if you backed Leave in 2016 and want to see your mandate bear fruit without further delay, be very careful what you wish for, especially if that wish includes seeing the back of Dominic Cummings.
at May 28, 2020