KINNOCK GETS CORONA TICKING OFF

Jeremy Corbyn isn't the only Labour MP swanning around irresponsibly during this crisis.  His smug self-importance appears to be shared by Aberavon MP Stephen Kinnock.  Despite the lockdown he tweeted a picture yesterday of a visit he made to his parents' house (see below). 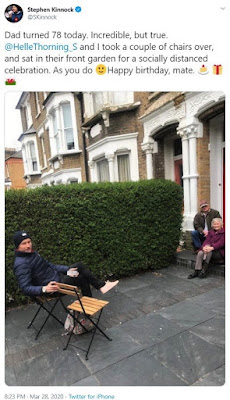 No-one is suggesting that Stevie embraced his old man or his 75-year-old mother Glenys, but the mere fact that he can brag about his totally non-essential escapade shows an arrogant disregard for the restrictions that the rest of us mere peasants are currently subject to.  Needless to say, the peasants fought back and they had the police on their side...

Having been told in very clear terms by his local constabulary what he did was not essential, Kinnock excused himself with the following message. 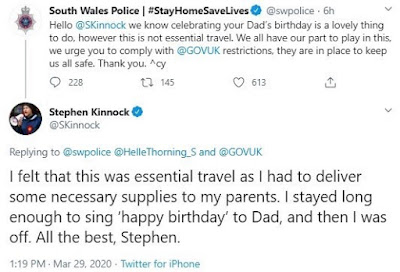 No apology, just sneering arrogance while the rest of us observe this lockdown accordingly.  The reason we stay at home is so that all of us are not subject to these restrictions any longer than necessary.  However, that aim is undermined somewhat by individuals who are either too stupid or too arrogant to realise that non-essential travel will prolong the restrictions.  As several Twitter users pointed out - Kinnock could have left those supplies on the doorstep, gone home and picked up the phone, or Skype, or FaceTime - and wished his dad happy birthday that way.  Furthermore, if it was such an essential flying visit why did your wife have to tag along too, with chairs, take a series of pictures and broadcast it to the world as a very poor example to other (clearly less important) citizens?  Not to mention the fact that Westminster is crawling with Covid-19 and MP Stevie has just handed over a small horde of items that could potentially pass the virus on to his elderly parents, rendering the social distancing exercise here pointless.

More photos from the Kinnock's cosy little get together were shared on Twitter by Stephen's wife Helle and his sister Rachel.