MAGUIRE CALLS FOR (YET) ANOTHER ELECTION

In the last ten years we've had an astonishing four general elections - May 2010, May 2015, June 2017 and December 2019.  This is the most elections in any one decade since the 1970s when there were also four.  Now, due to the coronacrisis one left-wing journalist believes the reset button should be hit and yet another election should be held when this is all over. 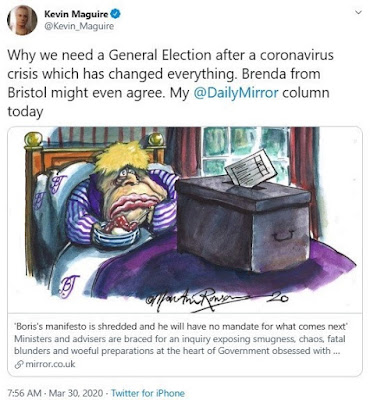 Good Morning Britain regular Kevin Maguire argues that coronavirus renders the Conservative manifesto null and void.  He's not wrong there.  The economic woe and national debt resulting from this will mean the Tories cannot possibly honour their election pledges: "The political kaleidoscope is shaken again and when we’re unsure how the pieces will settle, the democratic argument is clear for another election to take instructions from the people".  Maguire clearly feels that Labour could be well placed to win an election following the crisis, but he should be careful what he wishes for.

Recent opinion polls show the Tories are stretching even further ahead of Labour and as Maguire says so himself in his article: "Three Labour MPs I canvassed, smart politicians who will be in Starmer’s team, didn’t want one and are confident Tory record poll leads will drain away later when Johnson’s faults are scrutinised forensically on the other side of this apocalypse".  Maguire looks to the way Churchill was unceremoniously dumped from office at the end of the Second World War, but this is a lame argument for a Labour victory now.

The three most recent opinion polls for Westminster voting are as follows: