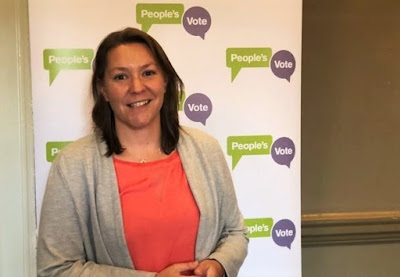 Anna Turley was one of those Labour MPs who not only went against the Leave mandate and the manifesto she was elected on in 2017, she went against her own constituents.  Redcar returned a 68 per cent Leave vote in 2016, but Turley knew best.  On December the 12th her constituents punished her arrogance by demolishing her 9,485 majority and replacing her with their first ever Tory MP.  To put this in context, the Tories finished a distant fourth here in 2015.

Who or what was to blame for Turley's humiliating defeat depends on who you're talking to.  Corbynistas, keen to expunge their leader of all blame, point to northern seats like Redcar and blame Brexit.  Turley is of the complete opposite view and blames Corbyn, saying his name cropped up on the doorsteps four times more than Brexit.  As a Remainer in a Leave-voting constituency she would say that, but the truth lies closer to home.  It was pressure from people like Turley that led Corbyn to finally succumb to a second referendum.  As we know, the second referendum was a Remain con-trick and 'Leave' would not have been an option on the ballot paper.  As one of those having pushed Corbyn to this atrocious Brexit policy, Turley has no-one to blame but herself.

Many in Redcar CLP and the wider Corbyn movement will have been happy to see the back of Turley.  A moderate she picked fights with the likes of Len McCluskey and even took his union to court.  Others will have been relieved to see off another metropolitan Londoner who was parachuted into their constituency and then arrogantly pushed Remain in spite of an overwhelming mandate to the contrary.

As for lessons learned from her defeat, Turley is unrepentant.  She continues to bash Brexit and, by proxy, those who elected her in 2015 and 2017.  Her response to the blue passport was particularly condescending (see below). 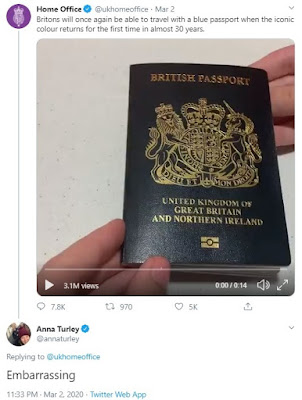 In reality there's nothing more embarrassing than the shame and loathing people like Turley feel for their own country.