WOKE KHAN NAILED ON FOR VICTORY 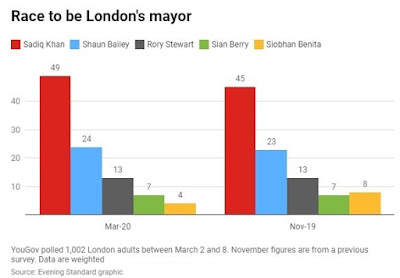 Sadiq Khan appears to be solidifying his grip on London according to the latest YouGov poll.  He's taken a whopping 25 point lead over Tory candidate Shaun Bailey, despite his inability to get a grip of crime.  He is now polling five points higher than the 44 per cent he received in the first round in 2016 and close to the 50 per cent he would require to win outright in the first round.  He's up four points from the last poll conducted in November, while the Lib Dem candidate is down by four.

To those outside looking in, this is a bizarre situation.  While the Mayor loves to show off his dedication to minority causes, his indifference to crime affects all Londoners, a point exquisitely put by George Galloway (see tweet, below).  One wonders just how lawless our capital would need to get before voters identified woke Khan as the root cause.  Perhaps they don't mind feeling unsafe and under the constant threat of crime, just so long as they're never far from a rainbow flag or a cycle lane? 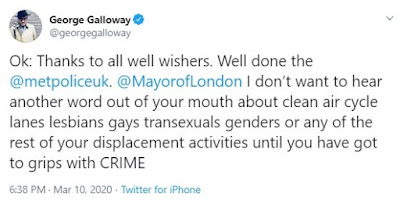