Labour has nullified the leadership and deputy leadership nominations from the Dudley North Constituency Labour Party.  The CLP met on February 7th to cast votes for its preferred candidates, but the meeting was mired in controversy.  More than twenty party members were told they couldn't vote, but were not given any reason.  Some were refused entry, while others were not.  Some members received invites to the meeting, others did not.  Crucially, in the final vote there were 96 votes cast, but reportedly only 90 eligible voters!

A lengthy and detailed complaint from local party member Abid Hussain was sent to Labour's regional office, leading to an investigation (see letter below, click to enlarge). 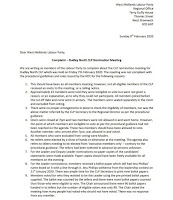 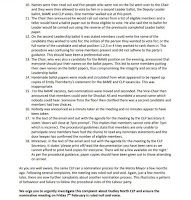 Hussain laid much of the blame on Cllr Shaukat Ali who was chairing the meeting.  Cllr Ali chaired the proceedings despite being a candidate in another vote held that evening, for a BAME vacancy on Labour's National Executive Council.  He was up against another candidate, but Mr Hussain claims that when the vote was announced the other candidate's name was mumbled.  This led to confusion with some members under the impression that only Cllr Ali was standing.

One wonders how many shambolic and clearly fixed votes are carried out in this way in CLPs up and down the country.  It certainly doesn't bode well for the leadership election results being announced next month.  With the hard left candidates struggling it appears that the only way they could win is via a huge fraud, but would the party dare?  Wouldn't it be too obvious?  Time will tell, and the party has certainly had plenty of time (three months and counting).

Incidentally, the two candidates nominated by Dudley North were Rebecca Long-Bailey and Richard Burgon.  Funny that.  The cancelled nominations will not affect their eligibility to stand as they had more than enough nominations to qualify for the ballot.  It does beg the question - why go to such lengths to ensure both were nominated when both had already qualified by the time Dudley North voted?  And finally, why has the party confirmed that no further action will be taken?