John McDonnell told Andrew Marr this morning that he'd "kept out of the leadership election".  Is that so John?  Funny that, because less than two weeks ago this email dropped into the inboxes of Labour members, endorsing Rebecca Long-Bailey. 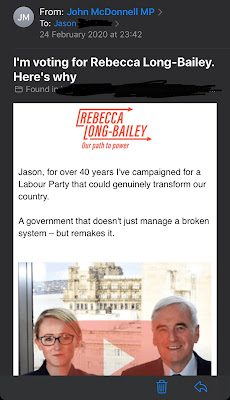 The email sparked claims of a 'stitch-up' and with widespread reports of missing ballots alarm bells are ringing.  If the missing ballots are merely an innocent glitch then it makes a further mockery of this epic process.  McDonnell himself has said he'd support shorter leadership elections, but they can't get things right after three months (and counting).

In addition to his email, McDonnell also attended the recent 'Rally for Socialism', an event in support of the Long-Bailey and Burgon campaigns.  In the last week he has retweeted three Long-Bailey messages to his Twitter followers.  This is hardly 'keeping out of the leadership campaign' is it?

McDonnell's denial that the Corbyn regime wanted to 'crush' its opponents within the party is also laughable.  The dozens of moderate MPs driven out during the last Parliament can attest to that.
at March 08, 2020