It was no great surprise to see Gordon Brown stepping up to endorse Keir Starmer for the leadership today.  More surprising was Starmer's enthusiastic response.  He is currently enduring a barrage of criticism and abuse from the continuity Corbyn camp over his refusal to publish a comprehensive list of his campaign donors.  The hard left are convinced that he is being funded by Tony Blair and in Corbyn's Labour that name is toxic.  Blair himself has said he won't endorse a candidate in the leadership election for that very reason, although he and Brown have both backed Ian Murray for the deputy role.

Labour in government can do - and has done - incredible things.

Privileged to have the support of Gordon Brown. pic.twitter.com/3B7h0uknvJ
— Keir Starmer (@Keir_Starmer) March 5, 2020

Brown's assessment of everything that followed his brief premiership is predictably grim, but the blunt truth is that austerity is rooted in his premiership and the ten years of reckless borrowing he oversaw as Chancellor.  Before he was kicked out of office he admitted that austerity measures were necessary, regardless of whether he continued as PM or not.  In his video endorsement of Starmer he also says that young people are being denied opportunities in education as if this is a Tory phenomenon - it was a Labour government that introduced tuition fees and a government of which he was an integral part.  Brown is morally bankrupt and has no place lecturing post-Brown Britain.

Also backing Keir Starmer for the leadership is this lovely chap. 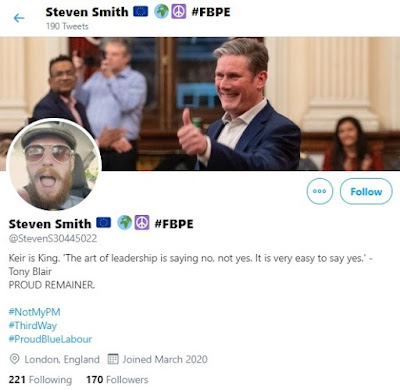 We've come to expect such vile stuff from remoaners, but this was so bad that Twitter removed it.  In a later tweet he bemoaned that his "favourite Costas barista just told me she is going to move back to Poland due to Brexit".  With latte-sipping middle class metropolitan-types you're going to take the north by storm Sir Keir!
at March 05, 2020