If, as widely expected, Keir Starmer wins on Saturday, one of the frontbench casualties is likely to be the hapless Ian Lavery.  The ultra Corbyn loyalist was made Labour Chairman in 2017 and has gone on to embarrass himself and the party almost every time he opens his mouth.  Most recently he hit the headlines after calling coronavirus a "great opportunity" for Labour.  He also defended commie journalist Ash Sarkar after she was trolled online over a viral clip in which she joked that the white depopulation of London meant her people were "winning".

Piers Morgan has described Sarkar as "one of the most spiteful and vicious people on Twitter".  Yesterday she mocked the PM's adviser Dominic Cummings after news broke that he was displaying symptoms of Covid-19.  And yet here's Lavery attacking the people trolling her...

We won't go over the historical exploits of Lavery as they are too numerous, but recently we clocked a disgraceful low that had previously gone unnoticed.  One of the many Twitter accounts he follows is that of Republican Sinn Fein (see below).  This is not to be confused with the Sinn Fein of Mary Lou McDonald and Gerry Adams - no, that's bad enough - Republican Sinn Fein is linked to the Continuity IRA and does not recognise the Good Friday Agreement.  Since 2004 Republican Sinn Fein has been designated a 'terrorist organisation' by the US State Department. 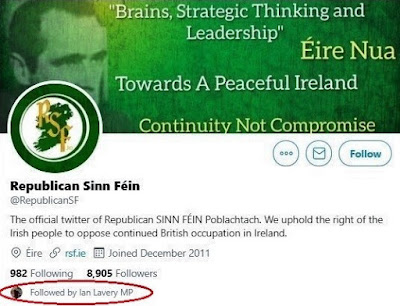 As clear as day and in full view of the public, Lavery follows a group that supports physical resistance to the British state.  Disgusting.  He also follows McDonald's Sinn Fein, but he is not alone there.  The official Sinn Fein Twitter account is also followed by hard left Labour MPs like Louise Haigh, Grahame Morris, Bell Ribeiro-Addy and, naturally, Jeremy Corbyn himself.

The loss of loony lefties like Ian Lavery (and Richard Burgon) from the front bench will be a huge loss - to the Tories.  Diane Abbott has already confirmed she is standing down regardless of who wins and the status of Jeremy Corbyn after Saturday will be watched with intense interest.  Would Starmer dare send him to the back benches after Corbyn has made no secret of the fact he is desperate to remain on the front line?  If Sir Keir does send him packing it will put the hard left on a war footing.  They are not going to leave quietly.
at March 31, 2020