A new Ipsos MORI poll has shown that Labour support is stagnating while the Tories stretch their lead.  The poll was taken as the coronavirus crisis was in its infancy (as it still is).  The Conservatives' five point increase appears to have come at the expense of the smaller parties.  It's the biggest margin shown by Ipsos MORI since April 2017, but worth noting that Labour closed that gap three months later, leading to Theresa May's electoral disaster.  The nation was not in the grip of a pandemic back then either.

Also polled were satisfaction levels with Johnson, Corbyn and the government overall.  Johnson is still enjoying net positive levels, as is the government to a lesser degree, but Corbyn maintains a dreadful satisfaction rating, even with Labour voters.  See tables below (click to enlarge). 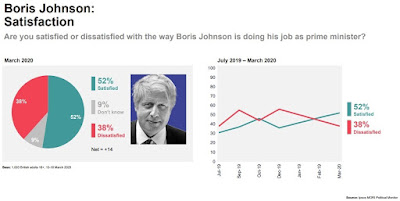 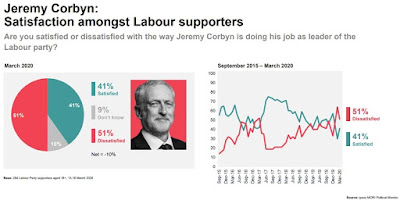