The news that health minister Nadine Dorries has tested positive for coronavirus received a mixed reception on Twitter.  While most rational people wished her a speedy recovery, others were depressingly less sympathetic.  Labour MPs were among those sending their kind regards, including Dave Lammy, Jon Ashworth, Angela Rayner, Chris Bryant, Jess Phillips, Wes Streeting and Rosena Allin-Khan.  However, some Labour followers and assorted remoaners reacted with vile jubilation. 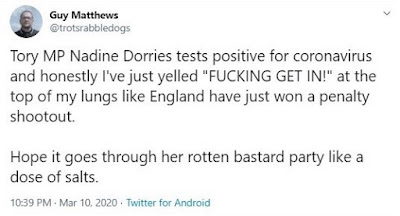 Guy Matthews is a Labour activist from Nottinghamshire and appeared in a Labour promo video last year. 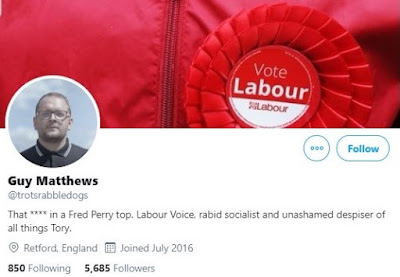 Joe claims to be a member of both Labour and Momentum, although following a previous Twitter controversy both deny he is a member. 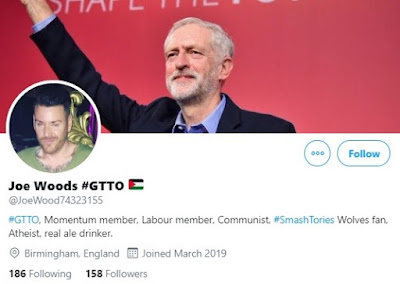 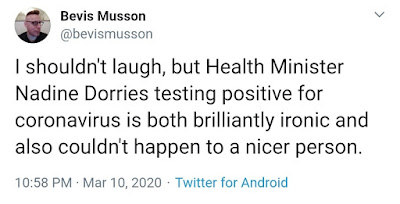 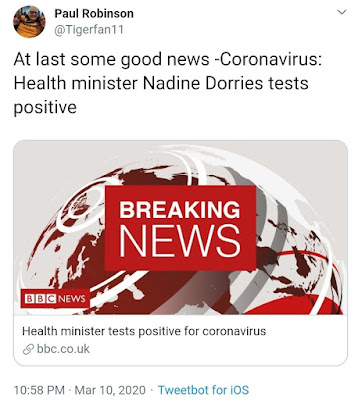 Others used the news to wish the illness on the Prime Minister.

One wonders how many of these foul individuals were - only a few weeks ago - asking fellow Twitter users to #BeKind after the suicide of Caroline Flack?

Thankfully Nadine Dorries is upbeat about her condition and tweeted that she hopes she's got over the worst of it.  However, she is concerned for her 84-year-old mother who had been staying with her and who developed a cough yesterday.  Something to think about for those wishing the illness on people purely for their political alignment.  People who don't share your views are human beings too and, crucially, they move around the population.  How many of you will contract the illness, what about your own elderly relatives?  What about the Great Leader himself?  As a man in his seventies, Corbyn is in the danger zone.