Lisa Nandy has sparked outrage on the left by publicly declaring that Jeremy Corbyn and his team were keen to wage war on moderates until they had been 'crushed'.  To make this even more infuriating for the left she exposed Corbyn's 'factional war' in an interview with the BBC's Laura Kuenssberg, a woman so vilified by Corbynistas that she is often booed at Labour press events.  Watch below.

Nandy's comments have been condemned far and wide by the Corbyn faithful, for whom any criticism of the Great Leader is treated as blasphemy.  The truth is no defence and there is no doubt whatsoever that what Nandy is saying is based in reality.  Over the last five years the Corbyn/McDonnell regime have waged war on moderates.  The number of MPs driven out of the party during the last Parliament was well into double figures even before the regime made it easier for MPs to be deselected.  Dozens more moderates stood down prior to the last election rather than face the reselection process.  As many as possible were then replaced with hard left Corbyn loyalists and that is why the Parliamentary Labour Party is now loaded with more extremists than ever before.

Nandy is spot on, but that doesn't counter the indignation of the left.  Barely literate party chairman Ian Lavery said: "This is sad. Lisa and I are friends but this truly is gutter like garbage".  Corbyn mouthpiece Matt Zarb-Cousin denounced her interview as "Utter bullshit".  Denial is strong in these circles, remember they are are the same people who just delivered the worst Labour election for almost a century and yet remain steadfast in the belief that their policies are 'popular'. 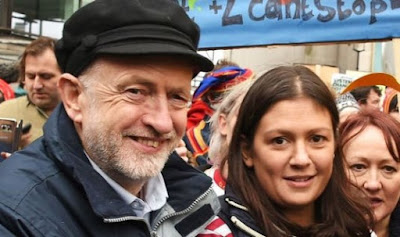