Islamist rabble-rouser Salma Yaqoob has taken a swipe at Labour moderate Wes Streeting over an article he's written for the Fabian Society.  In a tweet the Corbyn loyalist argued that Streeting should pipe down now that the politics of the left are 'being proven right'.  Hardly.  While it's true that socialism is having a brief moment in the sun, it's only as a consequence of the biggest crisis our country has faced in decades.  It's a short-term fix that will be phased out as coronavirus passes.  Socialism will not solve any of the long-term economic woes we face. 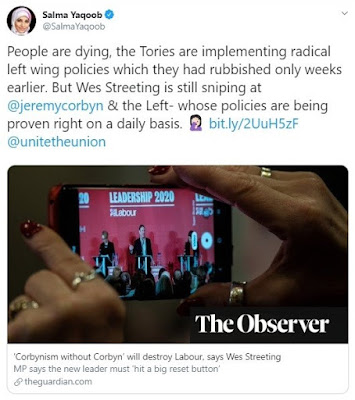 So what really rattled Salma?  Wes Streeting is a long-term critic of Jeremy Corbyn, the hard left and anti-Semitism.  As we all know the hard left are notoriously intolerant of criticism and anyone who bashes the Great Leader.  It doesn't help that Streeting is gay, something that also upsets Yaqoob.  She once described homosexuality as a 'lifestyle choice'.

What is very telling about today's Labour Party is that this horrid woman was allowed to join the party in the first place.  She has a proven track record of anti-Semitism and Islamism, but very quickly gained prominence and a nomination for the party's West Midlands mayoral candidacy.  Contrast this with the case of Femi Izawally who was today blocked from joining Labour merely because he tweeted that he wanted to further the causes of other opposition parties too.  The key difference between the two individuals is that Yaqoob supports Corbyn while Femi does not.

In responding to Yaqoob's tweet, Streeting baited her with the spectre of an old enemy.  When Yaqoob stood as a Respect candidate in the 2017 general election she went up against Labour's Naz Shah in Bradford West.  The campaign was incredibly bitter. 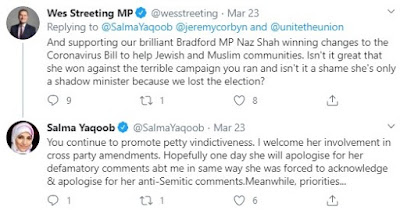 Streeting's article was entitled 'Let Us Face The Future Again' and calls for an end to Corbynism.  He writes:

"There is no future for the Labour party in Corbynism without Corbyn.  The next leader of the Labour party needs to hit a big reset button and to do so loudly enough that the voters notice.  That doesn’t mean that we need to jettison every policy, embrace the damaging economics of austerity or seek solace in past victories.  But it does mean building transformational economic policy that people can believe in, a worldview that provides security and opportunity in turbulent times and a political culture that is open, welcoming and inclusive.

There is no future for the Labour party if the debate about our future becomes locked in an ideological battle between two competing visions of the past instead of building a new politics that can unite the country around a vision for the future".

If Starmer wins the leadership election he will have a battle on his hands.  Streeting will be in his corner alongside many others, but the Parliamentary Labour Party is now loaded with Corbyn loyalists and they will firmly resist any move to the centre ground.
at March 24, 2020