Anti-Brexit campaigner Femi Izawally has clashed with journalist and Labour activist Owen Jones over Labour's decision to refuse his membership application.  Femi had appealed to little Owen's ego by suggesting that his support in the matter could have influenced Labour's decision.  Owen was having none of it and told him the decision was nothing to do with him. 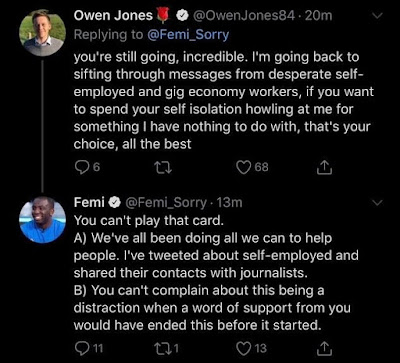 Clearly Owen has an inflated opinion of himself and his influence, but for clarification he does not sit on Labour's National Executive Committee.  Femi's assessment that Owen's status as a public figure gives him influence over the internal decisions of the Labour party says more about Femi as an individual.  His motive for wanting to join the Labour party was undoubtedly driven by a narcissistic urge to make a name for himself somewhere, having failed to achieve his main objective of reversing Brexit.  As a critic of Jeremy Corbyn he should have known that asking little Owen for support was always going to be rebuffed.

The pitiful tone from Femi shows that he is desperate not to have to go out and get a proper job.  One can almost taste his tears.

Like many opponents of the left our Twitter account is blocked by Owen Jones.  We still keep tabs on him, albeit we try and adopt a policy of largely ignoring him - the best way to deal with narcissists.  The above tweets were sourced via the excellent Turning Point UK.
at March 25, 2020