LABOUR TAKE CREDIT (AND THE BISCUIT)

The Labour leadership have responded to the government's lockdown of the UK by bizarrely claiming credit for it.  While it's a welcome sight to see politicians uniting in times of national peril, John McDonnell's assessment that it was his own personal intervention that swung it is laughable, arrogant and deluded.

Who'd have thought that the decision to lock down the nation had little to do with the elected government of the day, its array of medical and scientific advisors, or the troubling statistics that show we are potentially two weeks behind an Italian-scale catastrophe - but it was actually down to the personal intervention of one John McDonnell?  The political grandstanding on display here is astonishing.

Jeremy Corbyn was a little more low-key in taking the credit, but slipped it in after saying the Prime Minister's approach was right: "This is the right response and one we have been calling for".  Lame. 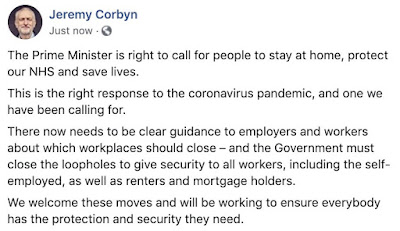 There was no immediate response from any of the leadership hopefuls, all three of which seem to have disappeared during the crisis.  There was however this intriguing assessment from Labour MP Geraint Davies... 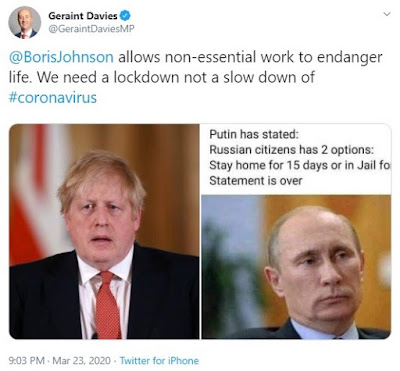 The member for Swansea West clearly feels that the current lockdown doesn't go far enough and looks to Mother Russia to set an example for libertarian Boris: "Stay home for 15 days or in jail for 5 years".  Just another reminder of how very thankful we should be that it's not Labour who are in charge of handling this crisis, despite the illusions of grandeur bouncing around in John McDonnell's head.
at March 23, 2020