Sophy Ridge has announced that she is to be joined live in the studio by Jeremy Corbyn on her Sunday morning show.  Corbyn, who is 71 in a couple of months, appears determined to ignore government advice on self-isolation for the elderly.  Earlier this week Corbyn's spokesman confirmed he would continue to attend the House of Commons during the crisis.  Former Labour MP John Mann is among those who have criticised Corbyn's behaviour: "He is putting at risk camera crew, the person who has to attach his microphone to his jacket, the receptionist, the presenter.  He should be doing all interviews on Skype from home".  Not to mention himself, after all he is the one who is in the at risk category.

What message does this send out to the people of his generation?  What does it say to younger folk, many of whom still idolise him and already treat coronavirus with shocking indifference?  One wonders whether this is one final act of spite from the Great Leader before he leaves his post.  Undermining the government is no longer a political game, it's literally a matter of life and death.  On Saturday a record number of confirmed Covid-19 cases were confirmed by the NHS and a record number of deaths in a single day (56).  Mr Corbyn you are setting a shameful example, but then what's new? 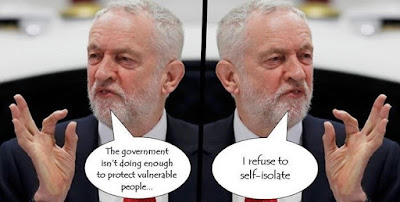