Is there any regime that the hard left won't side with against their own country?  Late last night Richard Burgon took exception to a Mail on Sunday report heavily critical of China. 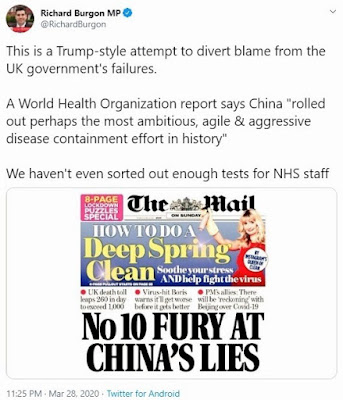 Although he quotes the WHO, it's clear that Burgon fawns over the authoritarian handling of the virus by the Communist Party of China.  Dictating people's lives, their opinions, thoughts and actions is what he and his leader long for.  Thankfully, they are not handling this crisis.  The necessary decisions taken thus far to restrict our lives have taken a heavy toll on the conscience of Boris Johnson.  The likes of Jeremy Corbyn and Richard Burgon would have taken great delight in stripping away our freedom and liberty.  That's the difference.
at March 29, 2020