FOR THE EGO, NOT THE MANY

It was Jeremy Corbyn's final appearance at Prime Minister's Questions today, although many will be wondering why he was there at all.  Corbyn was once again defying public health advice for the over 70s to go home and self-isolate for 12 weeks.  During his allotted six questions he raised the issue of a covid-infected construction worker who had been forced to work and in doing so is spreading the virus.  The irony appeared to be lost on him.  Corbyn is under no obligation to attend the House of Commons.  He's not going to lose his salary.  Others have stood in for him at PMQs previously, so why not now?  The answer is obvious.  It's not about you, the many - it's all about Jeremy Corbyn. 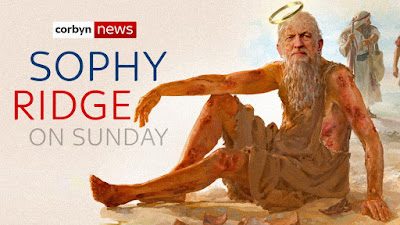 It's the same reason why he insisted on travelling to a TV studio on Sunday for a live interview with Sophy Ridge, instead of doing it via a satellite link from home.  His determination to flout advice and continue to appear in public is driven in part by his pending departure from the Labour leadership.  In less than two weeks he will no longer be Her Majesty's Leader of the Opposition and the thought of it is eating him up inside.  He has spent the last five years having his ego massaged by a loyal army of admirers.  He easily won two leadership elections (but not any other election, mind) and it has all built up this aura of self-importance.  We saw it on election night after Labour's humiliation became clear.  He couldn't say the word 'resignation', instead he could only say that he 'would not lead Labour into the next election'.  He couldn't let go.  He couldn't admit defeat.  In an unprecedented move he then refused to stand down until his successor had been chosen.  It's now 15 weeks since the election and he's still in place.

While Corbyn is still adored by his Momentum footsoldiers and hard left MPs like Abbott and Burgon, he is not universally popular in the Parliamentary Labour Party and never has been.  He was crushed by his own MPs in the 2016 vote of no confidence in his leadership.  Just 40 MPs supported him, with the other 172 overwhelmingly supporting Owen Smith in the ensuing leadership election.  One of them was the MP for Bermondsey and Old Southwark.  Neil Coyle has been a consistent critic of Corbyn and he took one last opportunity to snipe at his leader while Corbyn was at the despatch box today.

Contrast Coyle's assessment of Corbyn with that of Ian Lavery, the party chairman and Corbyn loyalist. 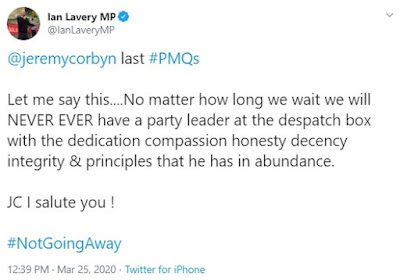 While Corbyn suffered a humiliating defeat in the no confidence vote of 2016, things are different now.  Many of those troublesome moderates have been forced out and replaced by hard left clones.  The split is more even now and that spells huge trouble for Keir Starmer if/when he wins the leadership election a week on Saturday.  Half the PLP will insist he maintains the hard left ideology of the Corbyn era, while the other half will insist he drags the party back to the centre where he himself is more at home.  There's going to be trouble ahead for sure.
at March 25, 2020