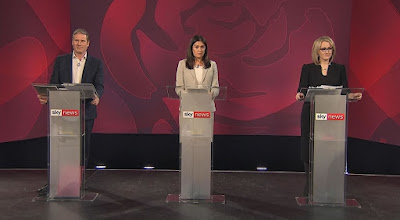 Ahead of the leadership election announcement a week from today, the following list was compiled by GQ magazine's George Chesterton.  Originally entitled the "20 Most Annoying Things About The Labour Leadership Contest", this is inspired...

1. Boasting about how working class they are.

If they were really working class, they wouldn’t be standing for leadership of the Labour Party.

2. Admitting they took drugs when they were students.

Perhaps, but does Labour really want to be the sloppy seconds of the Socialist Workers Party and the Stop The War Coalition?

4. "Labour will take action to tackle anti-Semitism in the party..."

...with an exciting new intake of MPs and party officials who have records of anti-Semitism.

This is reason #173 why Labour is unelectable.

6. However, also saying: "We should be proud of Labour’s achievements under Tony Blair".

Make your mind up.

7. Defending Corbyn No2: "He smashed the post-war consensus".

You can’t, because you lost.  That’s why you need to win.  Jesus.

9. Insisting it would be a shame if the new leader is not a woman.

True, but not if they are all unelectable (OK, Lisa Nandy is pretty good.)

10. "Labour won’t win anything by lurching to the right".

Labour didn’t win anything by lurching to the left.

11. Defending Corbyn No3: "Jeremy was attacked by the media more than any other politician in history".

Except for the children of Labour MPs.

13. Maintaining that Len McCluskey has an important role to play in the leadership contest.

16. Claiming that "our policies were popular on the doorstep".

Allow us to refer you to the general election.  And even if they were, doesn’t that make it worse?

17. Rating Jeremy Corbyn out of ten.

This is a totally pointless exercise, even if the answer is zero.

18. Saying they would stand up to Donald Trump.

They’ll never get the chance.

19. Defending Corbyn No5: "Jeremy’s legacy will last for generations".

Translation:  Labour will be out of power for generations.