Corbynista and unabashed commie Ash Sarkar has been taking some flak this weekend over a video clip in which she appears to mock the ethnic replacement of Londoners.  The clip was taken from an old Novara Media video from 2016 in which Sarkar argues that the views of Professor Ted Cantle are racist.  Cantle is opposed to identity politics and the failed and divisive multi-culturalism favoured by the left, so naturally having expressed views that differ from the left he must therefore be a racist.

The crucial "yes lads, we're winning" point in the video can be seen below.

Her attempt at flippancy is cringeworthy at best, naive and inflammatory at worst.  Taken out of context it has created a storm on Twitter and 'poor Ash' has been fending off criticism all day.  One of her many defensive tweets bemoaned her predicament and reaffirmed her belief that anyone who expresses concern at the rapidly changing demographics in our towns and cities is a racist.  Cue an unlikely ally... 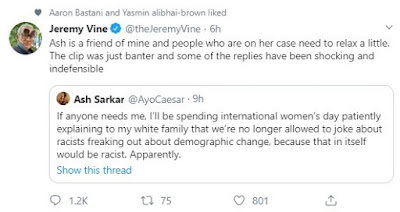 "Just banter" says the TV and radio presenter.  Note also that Vine's tweet is 'liked' by that other race-baiting lefty Yasmin Alibhai-Brown.  Sarkar later responds to Vine directly saying: "Really appreciate this, thank you!"  Next time you're wondering about where Jeremy's political loyalties lie, remember his defence of the race-baiting communist Ash Sarkar.
at March 08, 2020