Jeremy Corbyn's self-indulgent farewell tour continued last week with his final appearance at PMQs.  It's now only a matter of days until he hands over the Labour torch, but in the meantime he's desperate to keep himself in the spotlight and bask in the glory of his own fiction.  Regardless of how he and his fans try to hilariously claim that they won something - anything - history will not be kind to Corbynism.  Facts and figures speak louder than ideology - the worst Labour performance in a general election since 1935.

Corbyn's arrogance in the face of coronavirus advice is the topic of our most shared for the second week in a row, this one shared 6,811 times via the Facebook page. 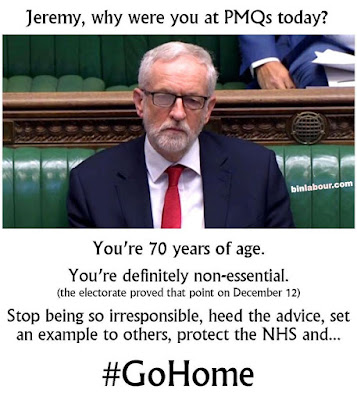