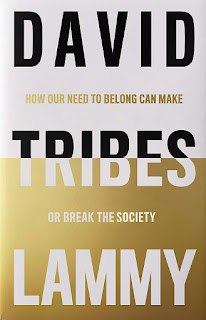 One can surmise from its title and its author that Tribes is 352 pages of race baiting and poisonous identity politics.  Despite his Christian faith, Lammy opens with a quote from the Koran.  He then goes on to detail a DNA test he took and the journey that its results took him on.  It's far too tedious to list his DNA traits, but he's basically a 95 per cent mix of various African tribes and 5 per cent Scottish.  The rest of the book is part-biography and part-blueprint for a multicultural Britain.

The main problem with Dave's proposal is that it's doomed to fail. The huge chip on his shoulder that weighs so heavily on his thought process is self-defeating.  Multiculturalism has been widely discredited and rejected, but Lammy is clinging to it all the same, reminiscent of the Corbynistas who worship Marx despite every single implementation of his ideology resulting in death and misery.  It's no surprise that Dave is one of the few remaining exponents of multiculturalism.  One of his proudest achievements to date is his five years as a minister under the Blair/Brown governments.  Multiculturalism was a product of New Labour and Dave is very much a product of New Labour.

He's also torn as an individual.  That big chip weighing him down won't allow him to fully embrace a British identity.  His dedication to his ethnic identity always supercedes his civic identity.  The historical ills against 'his people' drive his intolerance towards native Britons and yet he married one.  No wonder he's confused.

In his book he quotes the Jamaican activist Marcus Garvey: "A people without knowledge of their past history, origin and culture is like a tree without a roots".  Therefore it's acceptable for Lammy to champion his ethnic roots.  However, in the very same book he writes: "As long as British history is viewed through the lens of a white past opposed to a multicultural present, we risk perpetuating feelings of loss among segments of the population.  National pride will mean so much more if it’s accompanied by appropriate recognition of national shame".  So if it's OK for Lammy to embrace his ethnic roots, why is it unacceptable for native Britons to embrace theirs?  Why does history have to conflict with the present?  Lammy is as guilty of this combative attitude than anyone else.  He just can't see it because like most politicians, he is always in the right.