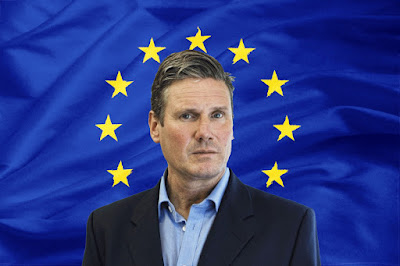 The Labour party has been accused of a distinct lack of self awareness since their election defeat.  All the mistakes that led to December the 12th's humiliation appear destined to be repeated.  Their policies were 'popular' we keep hearing from the hard left, while the remoaners still can't get past Brexit and continue to ridicule Leave voters.  Rebecca Long-Bailey recently told Andrew Neil that Labour "spoke in quite intellectual terms that were quite alien to our communities".  In other words, the voters were too thick to comprehend the beauty of our wondrous policies.

This kind of sneering attitude towards the electorate is one of the key factors that brought Labour to its disastrous defeat in the first place.  Yet they are too arrogant and cocooned in their ivory tower bubbles to see it.  "I do not sneer" Emily Thornberry repeated over and over again in an interview earlier this year.  If there's one thing people detest more than a condescending politician, it's a politician who cannot comprehend their own arrogance.

This isn't a trait that's unique to the hard left, it's endemic across the party.  Take centrist Keir Starmer, who many in the party blame for the election defeat.  He is widely perceived as the main driving force behind Labour's lurch towards Remain.  The 2017 general election, which many Corbynistas are still convinced they won, was fought on a platform of 'accepting the referendum result'.  Since then the party has flip-flopped so frequently that the public had no idea from one week to the next what Labour's Brexit policy actually was.  For the entirety of 2019 the PLP fought tooth and nail to stop Brexit from happening altogether, while the official party policy was still unclear.  After finally settling on a second referendum where 'Leave' was not an option, the stage was set and the electorate responded.

There is no doubt that Labour's referendum con was a significant factor in their losses across the Brexit heartlands, areas that corresponded neatly with the so-called 'red wall'.  If Labour are ever to regain power they will need to regain the red wall and they won't do that by continuing to treat northern voters like thickos.  Step forward Sir Keir Starmer at Labour's leadership hustings in Dudley yesterday, coincidentally a town that overwhelmingly voted Leave and that kicked Labour into the dust on election day.  When asked whether they would commit to a 'rejoin' policy all but one of the candidates rejected such a policy, all but the London-based architect of the second referendum con.

Starmer appears incapable of listening to the electorate outside his London bubble.  The British people voted Leave in 2016, they voted for Leave-backing parties in 2017, they voted Brexit Party in the European elections and they voted to 'Get Brexit Done' on December the 12th.  And yet Sir Keir is now suggesting he could well enter the next general election by ignoring three and a half years of Leave votes by pursuing a rejoin policy!

Do it Keir.  You'll consign Labour to the scrap heap for good.