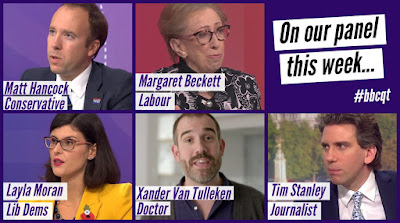 Once again this is not an inspiring line-up from the Beeb and has a decidedly woke feel about it.  The only Leave voter on the panel is the Telegraph's Tim Stanley.  There's almost certainly going to be a clash between the Health Secretary and the GP, although Hancock is so painfully dull it's not going to set the screen alight.  Dr Xander implored his social media followers to chuck the Tories out at the election for the 'sake of the NHS', although his opposition to Brexit was probably a factor too.

The sneering Beckett should have been put out to pasture years ago.  At 77 she's still clinging to the Westminster gravy train and almost old enough to be competing for a shot at Donald Trump.  Here's a clip from one of her previous Question Time appearances.  This was back in 2009 at the height of the expenses scandal, it didn't go too well for her...