A Labour MP has received a police warning after he attended two funeral services last week, one of which was attended by up to a hundred people in defiance of the coronavirus lockdown.  It was the latter to which the police were alerted.  When officers arrived at the scene on the outskirts of Birminghan, most of the mourners had dispersed.  A police spokesman later confirmed: "On arrival, officers found approximately 15 people socially distanced into family groups, therefore no action was taken".  Witnesses told police that Tahir Ali, the Labour MP for Birmingham Hall Green, had been one of those in attendance.  West Midlands Police confirmed that they had spoken to the MP, who claimed that he had been at the funerals merely as an 'observer'. 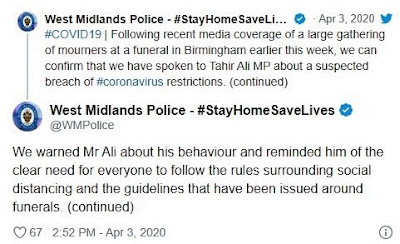 Ali was also criticised by Labour colleagues, including West Midlands Police and Crime Commissioner David Jamieson who said: "Tahir has been totally irresponsible and is letting his constituents down.  Mr Ali is not serving his constituents by endangering their lives.  Those in positions of civic leadership should be setting an example to all of the public. I would urge him to stop his intended funeral attendance in other boroughs too".

Ali was newly elected in the 2019 general election, replacing the controversial Roger Godsiff after a fierce reselection battle.  He also represents the Nechells ward on Birmingham City Council, a seat he has held since 1999.  Cllr Sharon Thompson, a senior colleague, did not criticise Ali directly, but said: "For anyone who suffers a bereavement, it is a difficult and painful time.  However, in these circumstances, measures have been put in place for one reason and that is to keep people safe. What we saw earlier this week with large numbers of mourners turning up at a cemetery simply cannot continue to happen.  Not only does it place funeral staff in an extremely difficult position, but it puts lives at risk". 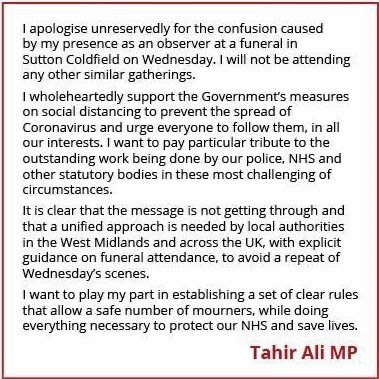 The contradictory statement does not address reports that Ali attended two separate funeral services, nor does it explain what he means by 'observer'.  The emergency Coronavirus Act states that the only people attending funerals during the crisis should be: "Members of the person’s household, close family members or if the deceased has neither household or family members in attendance, then it is possible for a modest number friends to attend".  There's no ambiguity there.  If Ali 'wholeheartedly' supported the government's measures he would surely know that a gathering of a hundred people neither constitutes 'close family members' or a 'modest number of friends'.

His own relationship to the deceased, if any, remains unknown.  What we do know is that from the home address he provided for last year's general election, he travelled almost eight miles to get to Sutton New Hall Cemetery - to 'observe'.