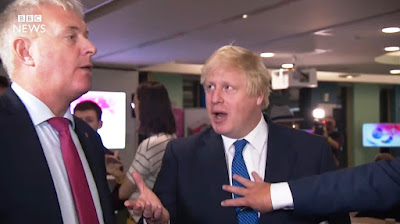 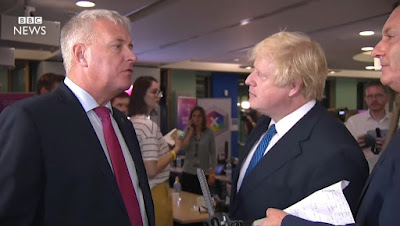 It was June 2017 and the general election was imminent.  The final leaders' debate had just taken place and BBC reporter Simon McCoy had caught up with Boris Johnson and Ian Lavery for their thoughts backstage.  Back in those days Boris was the Foreign Secretary, while Lavery was a shadow minister without portfolio.  What followed was an absolutely comical exchange between the pair that ended with Boris blowing a kiss at his Labour opponent.

Watch below, keep an eye on Boris and listen out for his description of Jeremy Corbyn as "weak as water".

Boris Johnson may not have used a food bank Ian, but it's highly doubtful his mortgage was paid off by the miners.  Just saying.
at April 14, 2020