We've all seen over the last couple of months that Jeremy Corbyn has no respect for the same rules that apply to the rest of us.  He continues to arrogantly swan around like they don't apply to him, exemplified by his appearance in the Commons earlier this week.  Still, he has some way to go to beat his brother's defiance.

Piers Corbyn is even older than Jezza, but he has even less respect for NHS guidelines.  On Saturday afternoon the 73-year-old conspiracy theorist led a protest in Somerset against the lockdown and bizarrely claimed that the pandemic wasn't real.  In the clip below he can be heard saying twice that there is "no pandemic".

Piers has repeatedly claimed in recent months that coronavirus is a plot by globalist billionaires to enslave the world in a surveillance state.  He also claims that a coronavirus vaccine will poison recipients and 'de-populate' the earth.  According to Piers, the leading figure behind this grandiose plot is Bill Gates.  His Twitter account is full of references to Gates and his 'vaccine/ID scheme'.

It sounds batshit crazy, but these daft notions are being lapped up by some.  Piers's fellow conspiracy theorist David Icke has led his own charge, alleging that 5G is behind coronavirus deaths.  This led to phone masts being attacked earlier this month.

Corbyn's protest on Saturday was said to have attracted up to fifty people, although he claims that the numbers were more like a hundred.  Social distancing was ignored during the protest, but Avon and Somerset Police initially stood off and took no action.  A spokesperson later said: "We attended a small protest in the centre of Glastonbury this afternoon.  Approximately 30-40 people turned up and the event was peaceful in nature.  Officers attended Market Place and engaged with the individuals concerned and explained the need to adhere to the current guidelines and the group subsequently dispersed".

Corbyn's claim that less people are dying now than at any time in the last five years doesn't bear any resemblance to the facts.  The following graphs are based on data from the Office for National Statistics and show that deaths in England and Wales began to climb unexpectedly at the end of March and continue to rise well above the average in April. 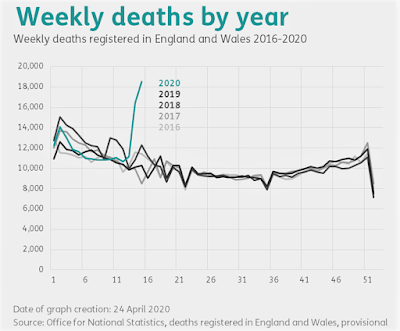 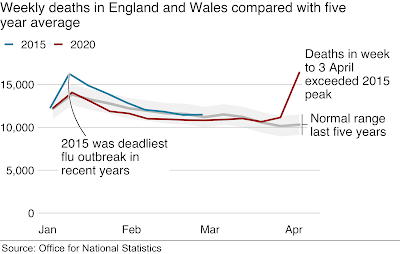 Of course Corbyn and his supporters would never let facts get in the way of their irresponsible ramblings.  A longer version of the protest video can be found here.  In it Corbyn's supporters make claims about 5G towers 'amplifying' coronavirus in the interest of depopulation and a 'new world order'.

These unsubstantiated claims and encouragement of mass civil disobedience are a massive insult both to the NHS and the families of the thousands of British citizens who are dying alone in hospitals across this country.  Shameful.
at April 26, 2020