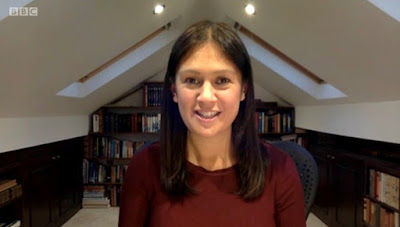 The increasingly tedious Question Time continued last night, once again dominated by coronavirus.  At this point a question about Brexit (or anything else) would be quite welcome.  Literally the only point of interest last night was the background for Lisa Nandy's appearance.  Housebound media appearances have been a staple of this pandemic and have led to several talking points.  There were the gatecrashing children of Nandy's colleagues Anneliese Dodds and Jonathan Ashworth.  There were also the mysterious picture hooks behind Yvette Cooper.  It's also quite interesting to note that Keir Starmer seems reluctant to broadcast from inside his home.  Earlier this week he appeared on Robert Peston's show speaking from a dark street and spoke to Sky News from his back garden.  What's inside the house Keir???

The Shadow Foreign Secretary was taking no chances last night and hid herself away in the attic.  Smart move Lisa.
at April 17, 2020