THE (FALLEN) EMPIRE STRIKES BACK

Anyone who thought that the hard left were going to slither away without a fight are clearly mistaken.  Corbyn and his Momentum footsoldiers haven't spent the last five years slowly infiltrating every corner of the party just to meekly give it away.  The leaking of the pro-Corbyn anti-Semitism report is proof of this.

The motivation for leaking the report is two-fold.  Its release aims to defend Corbyn and Corbynism by blaming moderates for everything that went wrong during his catastrophic leadership.  Secondly, it is to stoke fire in the belly of the left and create problems for Starmer's leadership.  Many in the left have responded by pretty much declaring war on the moderates.  As intended.

While petitions and tweets will have little impact by themselves, there is still a significant portion of the Parliamentary Labour Party that remain loyal to Corbyn.  Last week's purge of Corbynistas from the front bench doesn't change the arithmetic in Parliament.  There are currently more hard left Labour MPs than there have ever been and their joint statement released in the aftermath of the leak shows they intend to fight the moderates (see below, click to enlarge). 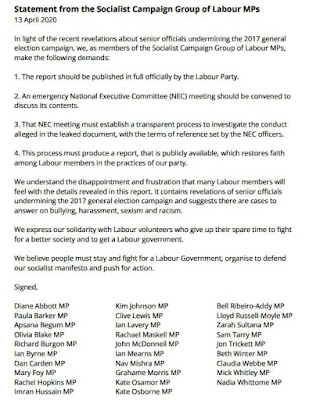 The language is clearly combative.  The word 'fight' is used twice, a word that Corbyn himself used repeatedly in the final months of his leadership.  His name is absent from the declaration, but there are plenty of close allies listed, including McDonnell, Abbott and Burgon.  The rest of the list is like a who's who of the new Parliamentary intake ie. those hard left candidates parachuted in at the last election to replace moderates purged during Corbyn's leadership.

While Corbyn may not be putting his name to documents or saying anything publicly, there is little doubt that he will be the unseen driving force behind the left's insurgency to come.  The looming battle between the two wings of the party will be a mirror image of what dogged him from 2015 to 2017.  The moderates are in charge now and the hard left are back to being the rebels.  One of the key advantages for Starmer is that thanks to his almost total exclusion of Corbyn loyalists from his front bench he will not suffer wave after wave of resignations like Corbyn did.  It's also worth noting that the only two Corbynistas kept on by Starmer in senior roles have not signed the above document.  Rebecca Long-Bailey (education) and Andy McDonald (employment rights) are presently toeing the line, but that's only to be expected so early into Starmer's leadership.  They've literally only just been appointed.

A couple of lesser frontbenchers are on the list.  Shadow ministers Rachael Maskell and Lloyd Russell-Moyle are not exactly known for being the sharpest tools though.  One is famed for a rant about 'saturating' the country with refugees, while the other is famed for such stupidity as grabbing the Parliamentary mace and ranting like a lunatic in his 2019 post-election speech.  Useful idiots to come?
at April 15, 2020